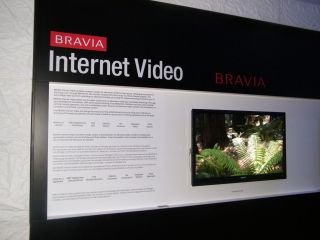 Sony unleashes a slew of new Bravia TVs at IFA 2009

Sony has announced a slew of new TVs and Blu-ray players at its IFA 2009 conference, with portable TVs, IPTV and Wi-Fi connected Blu-ray players being the order of the day at this year's show.

Blu-ray with Wi-Fi functionality simply means that you will be able to de-clutter your lounge even further, getting rid of that out-dated old Ethernet cable that previously bothered the back of your Blu-ray disc player.

The new BDP-S560 and BDP-S760 players from Sony have wireless-n standard connectivity, and are both WPS-enabled.

In addition to the new Blu-ray players and the heavy focus on 3D, Sony also launched some flashy new home cinema kit along with a new full HD Bravia TV with built-in freesat, with access to over 140 freesat TV and radio channels and an integrated freesat HD receiver with the new W5810 and Z5800 Bravias.

"The new freesat BRAVIA TVs have an integrated DVB-S2 tuner so there's no need for a set-top box or cables cluttering your living room," Sony informs us.

"The BRAVIA W5810 and Z5800 series also have a superb Full HD 1920 x 1080 pixel resolution and are packed with the latest picture and motion technology from Sony. Now, for the first time, you can really watch free satellite HD TV as it's meant to be."

Finally, on the TV front, it is all about portability it would seem, with the new Bravia S57 series, featuring a slim 19 inch LCD screen and "a choice of colour hues and trendy curved design, it's the ideal fit for your bedroom, kitchen or any home interior."

Stay tuned for hands on reviews and opinion from our team at IFA throughout the week.