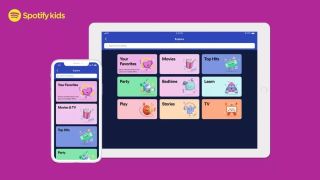 Spotify has announced a new age-appropriate app for kids called, as you’d expect, Spotify Kids. The service requires a Spotify Family Plan to use and is available starting first in Ireland, but will likely roll out to other territories in the near future.

"[The app] welcome[s] the next generation of listeners – kids – into the Family Plan experience," Alex Norström, Spotify’s Chief Premium Business Officer, explained in a a blog post.

According to information in the post, the app will offer an ad-free experience for kids (hence why it requires Spotify’s Premium Family Plan) with a catalog of around 6,000 curated songs from Nickelodeon, Disney, Discovery Kids, and Universal Pictures soundtracks and popular children’s artists.

Of course, if your kids are a bit older – somewhere in their teens, for example – Spotify Kids will allow you to set the age limit of their songs a bit higher, opening up artists like Taylor Swift, Ariana Grande, and Bruno Mars.

Well... yes and no. Spotify Kids is basically a safety-proof sandbox for kids. There aren't any ads, the songs are checked for references to drugs, sex and violence, and its limits can be modified to fit your kid's tastes as they mature.

A kids account will take up one of the six slots in your Spotify Family Plan, but that's probably a better alternative than letting your kids use your account and ultimately tainting the recommendation algorithm with Let It Go for the hundredth time.

Right now the service is still in limited beta on iOS and Android but, should everything go well, expect a full roll out sometime later this year or early in 2020.