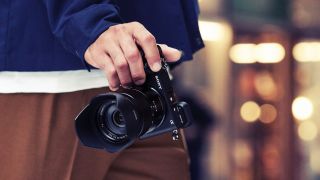 Is the Sony A7S III finally on its way? News of three cameras being registered for wireless certification has once again fueled speculation that Sony's long-awaited full-frame mirrorless camera is on the way.

Of the raft of ways in which information on new cameras can leak out, details on bodies being registered for wireless functionality is as common as it is tricky to decipher.

With typically only product codes that bear no resemblance to a camera's ultimate name to go on, together with Wi-Fi and occasionally battery details, quite what's coming is, to a large degree, anyone's guess.

Yet, if trusty camera-leaking website Nokishita is to be believed, we'll shortly be seeing a number of fresh interchangeable-lens cameras from the Japanese giant, in addition to a Cyber-shot compact and possibly even a lens.

On its Twitter account, Nokishita claims "up to" four interchangeable-lens cameras and one compact will be released, the product codes for three of these being WW594724, WW716189 and WW246025.

These have been registered for 2.4GHz Wi-Fi and and Bluetooth, although this doesn't give us any further clues as to what we should expect, as most cameras across all classes now have both on board.

Nokishita has also recently stated that Sony would be adding a new 35mm f/1.8 lens to its lens stable, with the product name SEL35F18F. While it doesn't back this up with further information, the lens's absence from Sony's current lineup has been frequently noted, so its release would make a lot of sense.

Sony does currently offer a 35mm f/1.8 lens for its APS-C-based mirrorless cameras, although it doesn't carry one that satisfies the dimensions of a full-frame sensor. This is in contrast with Canon and Nikon, who each announced such an optic for their respective EOS R and Z lines at the launch of those lines.

The Sony A7S II was announced almost four years ago, and its replacement has been anticipated for some time – Sony has updated both its A7 and A7R lines with third-generation models, namely the A7 III and A7R III.

Rumors of a second-generation A9 model, possibly called the Sony A9 II, have also been circulating, particularly with the 2020 Olympic Games in Tokyo just a year away, although Sony did recently give its existing A9 model a boost with new firmware.

While speculation of a new Cyber-shot model will make many think of a new addition to the popular RX10 and RX100 lines, it's entirely possible that a new model would belong to one of the company's other Cyber-shot ranges, such as the WX and HX superzoom lines.