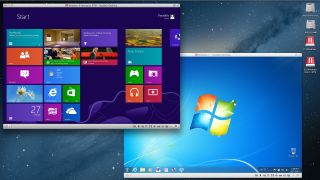 The hallmark of Microsoft's new OS is that it's touch capable, meaning everyone from hardware makers to software manufacturers is scrambling to embrace the new possibilities.

Parallels is among the firms adapting to the W8 landscape, bringing tablet-touch gestures to the desktop mold with Thursday's update.

The company has also integrated a single tile to the Windows 8 interface for swift access to shared Mac apps.

According to Parallels, its Desktop 8 for Mac software already has deep built-in integration between the Mac OS X and Windows 8 operating systems.

Match that with the new updates and users can use Mountain Lion's Dictation feature in Windows applications, plus add Windows apps to Launchpad and Mac Dock.

Retina display settings, as mentioned, nabbed an update that should make for easier screen optimization.

Lastly, Desktop 8 for Mac users will find smoother transitions when entering and exiting Coherence mode thanks to the added USB 3.0 support.