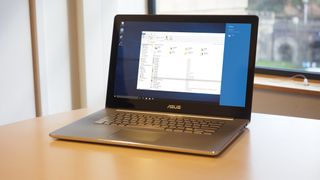 With its final reminder to try and persuade Windows 7/8.1 hold-outs to make use of their free upgrade to Windows 10 – an offer that expires at the end of this month – Microsoft has gone full-screen with its nag prompt.

Previously, the 'Get Windows 10' (GWX) nag pop-up has been limited to a small dialog box, albeit one that has appeared with annoying frequency and has been burdened by some controversial issues (for example, depending on their exact Windows Update settings, some folks have had the upgrade pushed through without being asked).

The new nag screen has the potential to annoy folks further, given that it isn't just a small box, but rather the reminder takes over your entire screen – albeit with an apology for interrupting your computer usage.

The blurb underneath reminds the user that Microsoft recommends upgrading to its newest OS, and that you can easily rollback to your old operating system if you decide that Windows 10 doesn't work for you within the first month.

Of course, it's theoretically easy to rollback – as ever with these sort of processes, your actual mileage may vary and there's no guarantee you won't encounter technical hitches when downgrading (or indeed upgrading to Windows 10 in the first place, depending on exactly what apps or hardware you're running and potential compatibility or driver issues).

The new nag screen offers you the option of upgrading now, or being reminded later, but at least in this final month of the freebie upgrade offer, Microsoft has also introduced a choice which states 'do not notify me again'. Click this and you won't get another reminder (that's an ability many users have been asking for all year).

One thing's for sure – all this GWX controversy will soon be over when the end of July rolls around.