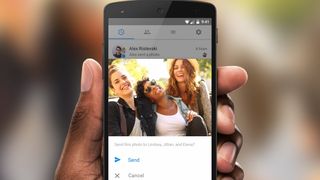 It's not quite magic, but it could certainly be useful

Smartphones have made it easier than ever to capture moments, but sharing them is another matter entirely.

We've all been on a night out, taken reams of shots only to have to work out which to upload to social networks the next day. But Facebook's new 'Photo Magic' feature aims to solve that problem.

The feature, which is currently being tested on Android and iOS in Australia, is built into Facebook Messenger and uses Facebook's facial recognition smarts to notify you whenever you take a snap of one of your 'Book friends.

If there's more than one person in the shot, then Photo Magic will send the image to everyone in it via a Messenger group thread.

There's a risk that it could be intrusive, potentially popping up notifications while you're still shooting, or, as it only brings up a notification for the last photo you took, potentially overlooking the best one if you fire off a burst of shots. But according to TechCrunch the team behind it is looking into improving these aspects.

And, good news: if you don't want to use it, you don't have to. You can turn notifications off and opt out of having your face recognised in other people's pictures -but if you do choose to use Photo Magic it sounds like it could save a bit of time and make sure people are sending and receiving more snaps.

By making Facebook Messenger more photo-centric it could also better help it compete with the likes of Snapchat - although just sharing them with a Messenger group sounds weird.

Currently you can't get Photo Magic outside of Australia, but it's expected to land in the US soon and if people respond well we'd imagine the rest of the world will get it too.