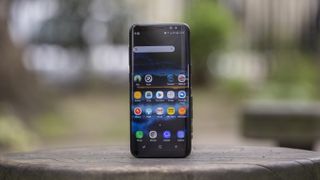 TechRadar has reviewed the brand new Samsung Galaxy S8 and it’s our favorite phone you can buy right now.

The Samsung Galaxy S8 received a 4.5 star rating with our review praising it for an amazing display, great camera and some impressive power.

Samsung's Galaxy S8 Plus has also entered our best phone of 2017 list in position four behind the Galaxy S8, iPhone 7 Plus and the iPhone 7.

Neither phone received the sought after five star rating, which we awarded both the Galaxy S7 and Galaxy S7 Edge with last year.

Neither LG G6 or the Huawei P10 has managed to make the list, but there are other entries from the likes of OnePlus, Motorola, HTC and Sony.