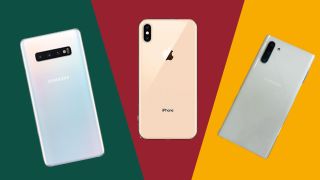 Samsung has launched the Samsung Galaxy Note 10 Plus, its powerful phablet with a built-in pen, massive display and huge battery, here to replace your tablet or plus-sized phone. But it’s not the only massive handset around. In fact, there’s lots of competition if you’re looking for such a big device.

Samsung itself launched the Samsung Galaxy S10 Plus early in 2019, a phone which is nearly as big as the Galaxy Note 10, with the same screen tech and chipset, and it has actually got more front-facing cameras.

But Samsung doesn’t have a monopoly on large phones, and the iPhone XS Max is Apple’s biggest smartphone to date. It has got a bigger display than the S10 Plus, along with all of Apple’s newest hardware like the A12 Bionic chipset, but not quite as much camera capability as the others.

So if you’re in the market for a new plus-sized smartphone, you’ve got lots of options (including many non-Samsung or Apple devices, but we’ve only compared these few). But which phone is for you? We’ve compared all these devices to help you find out.

The biggest of the three smartphones in terms of display size is the Samsung Galaxy Note 10 Plus, with an enormous 6.8-inch screen.

It’s an AMOLED Infinity-O Display (so named for the o-shaped cut-out where the front-facing camera goes), with a resolution of 3040 x 1440. That means there are 498 pixels-per-inch, which is great quality for a smartphone.

The iPhone XS Max is a little smaller, with a 6.5-inch screen. It’s an OLED (rather than AMOLED) display, so perhaps isn’t quite as high-quality as the Samsung screen, and won’t show colors quite as vividly, but its 2688 x 1242 resolution gives it 458 pixels-per-inch, so it’s only a small step below the Note 10 Plus in terms of sharpness.

The smallest handset of the three is the Samsung Galaxy S10 Plus, with its 6.4-inch screen. It has actually got the same AMOLED Infinity-O Display as the Note 10, including the same 3040 x 1440 resolution, but because the screen is smaller, that means the pixel-per-inch count is the highest of the three phones at 522ppi.

Since it has the biggest display, the Samsung Galaxy Note 10 Plus also has the biggest body, with dimensions of 162.3 x 77.2 x 7.9mm, so it’s certainly a bulky device. It has a USB-C port and comes with an S Pen, a stylus you can use to turn your phone into a digital notepad.

The design of the iPhone XS Max is also notable because it uses Apple’s Lightning port instead of the industry standard USB-C. On top of that it has a notch, so the front cameras are housed in a black bar cut into the top of the screen, instead of a punch-hole camera cut-out as you’ll find on the Samsung phones.

Moving on to the Galaxy S10 Plus, this has a 157.6 x 74.1 x 7.8mm body, making it the smallest, though still far from small. But it has something the other handsets don’t have in the form of a 3.5mm headphone jack, which the industry has slowly been phasing out. Like the Note 10 Plus it also has a USB-C port.

And what materials are these phones made of, you may ask? Well, they all have fronts and backs made of Gorilla Glass with metal frames between – that’s basically standard for premium smartphones at this point.

Just as there’s a clear progression in terms of display sizes, the handsets also have a distinct progression with the number of cameras.

The iPhone XS Max has two rear cameras, both of which are 12MP. One is wide-angle, and the other is telephoto, used for zoomed shots, and in this case capable of up to 2x optical zoom.

When you make the step up to the Samsung Galaxy S10 Plus, you’ll find three rear cameras; two of which have the same megapixel count, and function, as those on the iPhone XS Max, but the third is a 16MP sensor with an ultra-wide lens. This kind of snapper has a large field-of-view for group or panoramic shots, and many people like to use it as part of their photographic repertoire. The main wide-angle sensor also has variable aperture, so it can be used to take great pictures in a wider range of situations.

If you want photographic superpowers, look to the Samsung Galaxy Note 10 Plus, which has four rear cameras. It has three in common with the Galaxy S10 Plus, and an extra DepthVision Camera which is rather similar to a Time-of-Flight (ToF) camera – it can detect depth, which is useful to create accurate background blur in portrait or macro images.

Looking at the front cameras, the Note 10 Plus isn’t actually the winner in terms of numbers. It has a 10MP snapper, which is a step up from the 7MP camera on the iPhone XS Max, but the Galaxy S10 Plus actually has two front-facing cameras, in the form of a 10MP main shooter and an 8MP depth sensor, which is used for the same purpose as the DepthVision Camera on the Note 10. This means it’s geared to take better selfies.

Anyone who knows about Apple device batteries can probably guess the clear loser in terms of battery life – the iPhone XS Max has a 3,174mAh battery, which would be fairly slim for a normal-sized device, but because of the XS Max’s large display, it’s extremely small. We found the device lasted a full day if we used it sparingly, but if we didn’t temper our use of it, it needed topping up mid-way through the day.

In terms of powering the devices up, all the handsets come with wireless charging, which is good news for people with such a charger, although the Samsung phones can also be used as wireless chargers.

If you’re powering up the old-school wired way, both the Galaxy S10 Plus and iPhone XS Max support fast charging of up to 15W, while the Note 10 Plus supports up to 45W if you have the right charging cable.

As you may have noticed, the two Samsung handsets have quite a bit in common, and this extends to their internals. Both run on the Snapdragon 855 chipset in the US, and Exynos 9820 elsewhere, and the operating system is Android 9 Pie with Samsung’s One UI laid over the top. You’re also getting up to 12GB of RAM, so the devices are both processing powerhouses.

In contrast, the iPhone XS Max uses all Apple’s hardware and software – it has got the A12 Bionic chipset, and iOS 12 operating system, along with 4GB of RAM. Both the operating system and processor are roughly equal to Samsung’s phones, but the low RAM amount might leave you waiting sometimes.

We’ve briefly mentioned the Samsung Galaxy Note 10’s S Pen above, and it’s a reason many people consider the Note devices, as it can be useful for a range of features like annotating documents, doodling, or just coloring in pictures you take.

The Samsung Galaxy Note 10 Plus release date is set for August 23, with pre-orders for both handsets opening on August 7 (or August 8 in some markets).

In short, whichever handset you opt for here, you're not going to be disappointed. All three offer great displays, plenty of power and a lot of storage.

If you're more productivity focused, the Galaxy Note 10 Plus is probably the handset for you with the S Pen and additional features allowing you to do more with the phone.

However, the Galaxy S10 Plus is almost as good, offering a similar array of features for a lower price tag.

Finally, Apple's iPhone XS Max is special in its own right. It's the biggest iPhone ever, with a huge screen, and if you're committed to Apple's ecosystem and want the firm's ultimate handset, this is the one to get.