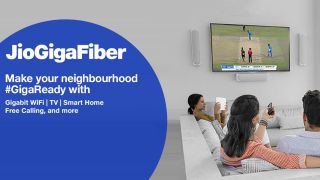 Reliance is gearing up to announce the commercial roll-out of its Jio GigaFiber fiber-to-the-home (FTTH) services from August 12. The Jio GigaFiber internet service was announced last year in July with registrations for the preview starting from August 15. Initially, Reliance had revealed that Jio GigaFiber would be available in 1100 cities of India which later increased to 1600 cities.

According to a report in The Hindu, the commercial roll-out of JioGigaFiber along with JioTV services will be announced at the Reliance Annual General Meeting (AGM) that is scheduled for August 12.

Reliance JioGigaFiber preview plan offers up to 100Mbps speed in addition to complimentary access to the whole suite of Jio apps. The plan gives 100GB worth of download/upload data for free under the preview offer for a price of ₹2,500, which is refundable.

Earlier, the same plan was being offered at ₹4,500. But the accompanying GigaHub router supported only single-band channel which provided lower browsing speeds and developed some further issues after which the plan was discontinued.

As per a report by LiveMint, Reliance is looking to offer a triple combo pack for its FTTH, JioTV and landline services which could start at ₹600 per month.

Reliance Jio is now the no. 1 telecom operator in India

Reliance is currently the numero uno telecom player in India with a subscriber base of over 331.3 million till June 2019. The company was able to reach this milestone in a matter of just three years.

Previously, Vodafone Idea was the single largest telecom operator but the merger could not help the company sustain customers. As a result, the company has reported a decline in its user base from 334.1 million to 320 million in Q1 2019.