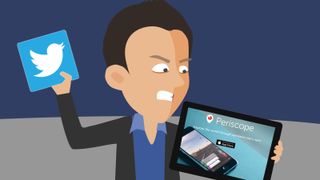 All aboard! Next stop, Mobonia. That's right folks, strap yourselves in as we're about to steam into another 7 days in phones and, well, what a week it has been. Seconds became minutes. Minutes become hours. Hours became days. Seven in total. Solid week everyone, well done.

The internet is a wonderful place. No sooner had Twitter launched its Periscope app - allowing you to 'explore the world through someone else's eyes' - than some online degenerates turned it into what's basically the new Chatroulette.

Broadcasting live video around the world to anyone who wants to watch/has nothing better to do isn't new and Periscope finds itself locking horns with Meerkat and Twitch.

Sure they can be fun, but so was Vine when it first launched and that's increasingly fallen out of the 'this is cool' limelight.

I think it's time to down periscope and submerge myself in some more exciting activities. Maybe I'll watch this paint dry... who wants to watch the live stream? Probably too many of you.

Samsung, possibly the biggest culprit in the bloatware-on-smartphones saga, has read its pre-installed app collection their last rights - and it's about time.

I can't tell you how many times I've nearly lost my rag when battling through the storm of pre-installs on Samsung phones - willing them to disappear but never having the option to actually disable them.

Manufacturers are always harping on about how the smartphone is an extension of you, how it's your most personal device, but my phone doesn't feel personal if S Voice, S Health, Galaxy Apps and more are smashing me in the face every day.

This new functionality is only available on the Galaxy S6 and S6 Edge for now, but it's at least a start and while you can't actually uninstall apps you can hide them completely from view.

A week had passed since Winston left hospital and he was still struggling to adapt to the new smartphone age.

The power of these phones made his much loved BlackBerry Storm seem pretty rubbish. His eyes had now been well and truly opened.

Fully functioning, multi-touch displays, octa-core processors and 20MP+ cameras - it was all too much and it was frying his cyborg circuitry.

Winston was also still learning about his own newfound abilities. Ever since being rebuilt as part robot he was able to gallop at sonic speeds, leap higher than a 20 storey building and, rather confusingly, had the ability to toast bread thanks to a handy slot in his chest.

He'd experimented with a cheese toastie, but the melted cheddar just got stuck in his mainframe leading to a quick trip to A&E for a deep clean. The irony of the cheese toastie being his favourite snack was not lost on him.

But back to his mighty struggle: while he used to be the go-to guy in forest for all things mobile, now he was awash with a world of new phones. While many were beginning to make sense there was one organisation he still couldn't work out.

Its handsets were housed in huge, usually glass fronted, temples with a glowing fruit emblem leading mesmerised followers into its oddly sparse interior.

Rows of benches housed identical products, the only variation being subtle changes in colour. The quiet sheen of mumbling approval drew Winston in, until he was startled by The Man in Blue, proclaiming to be a 'genius'. He bolted for the door at (literally) the speed of sound.

Winston had no idea what this place was, but there was certainly an over-inflated sense of knowledge and an uneasy obsession with lower case i.

This new world was confusing, scary and lacking in quality cheddar cheese toasties.

Let us take you back briefly to 2014 and CES in Las Vegas. Samsung was showing off it's fancy new curved UHD TVs and managed to convince movie director Michael Bay to say a few words.

And it really was just a few words, and probably not the ones Samsung were hoping for.

Laura is 21. Laura is a victim. A victim of selfie-shunning, a cruel game played by the 'popular' crowd at university and in everyday life. There is no escape for Laura.

She was drawn in by Mercedes and Portia, they treated her as an equal - but then the trouble started. Facebook profile picture update day, a chance to prove to the world that she was indeed 'popular' but alas, heartbreak.

At the final moment a cruel twist of the wrist and tilt of the head by Portia cut Laura out of the selfie she'd always dreamt of.

The phone to save us from our phone

Yes. That really was the bold claim in Microsoft's Windows Phone 7 ad as it poked fun at what appears to be mainly BlackBerry users. There's even a chap dropping his phone in a urinal. HAHAHA he's so silly.

So who's really laughing now? Certainly not the guy with wee all over his handset.

We've reviewed the shiny new HTC One M9. It's lovely, but it feels like it's missing something.

Facebook wants to know everyone you call, and everyone who calls you. Is that cool with you?

In the UK, BT has jumped back into the mobile network game with its 'BT Mobile' service, while Three UK's owners have confirmed the purchase of O2.

Are smartwatches too rich for your taste? Well how does a £30 (around US$45, AU$55) smartwatch sound? Say hello to the Sport Watch.

Love phones? No, do you REALLY love phones? Like so, so, so, so much. Well prove it, punk, with our fiendishly difficult quiz.