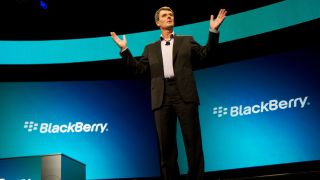 Questions marks were raised when Thorsten Heins was appointed CEO of RIM 12 weeks ago, with doubts over whether he would be able to drive new life into the firm.

We had concerns here at TechRadar once we learnt that former joint-CEO, Mike Lazaridis, was set to become Heins' right-hand man, making us question how much actual control Heins would have on the company.

Heins' arrival at the top didn't seem to signal a new chapter for RIM, with the straight-talking German looking to continue where his predecessors had left off, leading to concern over whether the firm could break out of its downturn.

However, having witnessed Thorsten first hand during BlackBerry World 2012, he seems to have all the credentials, at least in terms of honesty and presence, to prove he is the man to pull RIM out of the mire and back into the thick of the mobile game.

Too often we see company representatives waxing lyrical about their products and skirting around the difficult and uncomfortable topics, as they exude an unhealthy and quite frankly, sickening level of arrogance.

Heins, on the other hand is calm, collective, a man who clearly has his head screwed on, knows where he and his company stands and is not afraid to highlight the issues RIM needs to overcome.

Of course, during his keynote presentation on Tuesday morning, Heins expressed great enthusiasm for the BB10 platform which he has worked tirelessly on for the past year and a half.

It wasn't forced enthusiasm and hype, however. Heins expressed a boyish pride for his product, coming across even slightly embarrassed as he explained his genuine belief that BB10 is going to be an excellent mobile computing platform.

Sure, the phase "super awesome" was bandied about a little too much for my liking, but you can put that down to excitement from a team who really believe they have created a product set to rival iOS and Android. And, to be fair, I reckon they've at least got a chance.

For all the excitement over the new platform, Heins is keeping his feet on the ground and in his press session the following day you saw just how focussed and driven he is.

The session itself was unique, as it was the first time a RIM CEO had attended an open press event, which Heins explained was part of his plan to build new relationships.

"RIM is looking to engage more with the stakeholders around us, including the press, and really start communicating a bit more about what's going on in RIM, what we are doing and where we're heading."

Heins went on to highlight the problems the company faced after it saw massive growth from 2007 onwards, which lead to it losing focus, direction and efficiency.

He admitted that the firm tried its hand at too many things and the BB7 platform had run its course, with focus now on the next decade and BB10.

We are all aware of the issues RIM has had, but when the CEO comes out and talks openly and honestly about them it gives you more confidence in the company – as you feel it isn't trying to hide anything.

Heins highlighted that RIM has an "uphill battle in the US", where he admitted the firm's lack of LTE devices and over-done touchscreen innovation saw it lose market share.

"In the US we are behind, but I am convinced we will be a strong contender again and I absolutely expect us to regain market share in the US."

"We are here to win. I'm not here to just be in the game"

RIM is performing well in other markets, especially those which are emerging, with its budget BlackBerry handsets proving popular.