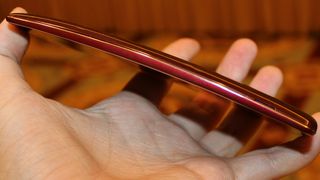 The LG G Flex 2 is just the beginning

Curved smartphones are the future. There, I said it. Don't misinterpret that, they're not the present, the original LG G Flex was unwieldy and under-specced and don't even get me started on the Samsung Galaxy Round.

But what a difference a year makes. The Samsung Galaxy Note Edge might not be ready for prime time but it demonstrates a genuine use for curves, providing you with a small second screen with contextual controls that don't get in the way of the main interface.

Now we're seeing the LG G Flex 2, which packs some serious power, as well as featuring a better screen and a more manageable size than the LG G Flex. There's also talk that there might be a curved version of the Samsung Galaxy S6. Even Apple's been exploring the idea.

So curves are clearly here to stay and LG and Samsung are putting them into some increasingly compelling high-end handsets. It's still easy to dismiss them as gimmicks, but the Galaxy Note Edge has already demonstrated one use for a curved display and they have numerous other potential benefits.

As phones become more powerful and 4G becomes more widespread we're increasingly using our phones to watch videos and play games, both of which could benefit from a curved screen. There's a reason so many new televisions have them - they're more immersive and reduce reflections.

They also allow for bigger screens, as the curves make it less of a stretch to reach the corners, or looked at another way they make normal sized screens easier to use for the same reason.

They can also be more comfortable to use. This may seem counter-intuitive when you're used to using flat phones, but many handsets already have gently sloped backs to better fit the contours of your hands and a curved screen just takes that idea further and also makes it a better fit against your face, for the important matter of actually making calls.

Theoretically curved screens are also stronger than their flat counterparts, as curves have more structural integrity and in some cases they're flexible, allowing them to bend rather than snap.

That in itself is a fairly minor point, but flexible is a precursor to foldable and the ability to fold a phone could prove enormously useful, as you could adapt the size and shape to different situations.

Of course we're a long way off that yet, but it's already being explored and curved screens are a logical stepping stone.

So there are a lot of upsides to curved screens, both now and looking ahead and few real downsides. All they need is to be paired with a truly compelling handset that makes the most of their advantages, while packing in all the other tech and specs that makes a smartphone desirable.

The general public might still need some convincing, it might even need Apple to jump on board before curved screens really become popular, but they have endless potential and they're an obvious thing for manufacturers to start exploring.

Smartphones are levelling out when it comes to power, with even lower end phones delivering impressive performance. Screens can't get much bigger or higher in resolution without verging into pointless territory and battery technology is developing too slowly to really drive competition.

Cameras have been a recent focus and I'm sure there will continue to be innovations and improvements there, but there's a limit to what you can do without a comically oversized lens. Curved screens seem like the obvious next step in smartphone innovation that manufacturers will make, first to stand out and then, once they start to catch on, to stay relevant.

They're new, they're exciting, they'll spur development of even more technologies and, perhaps most importantly, they're genuinely useful. In all the ways I've outlined above and probably in many more that no-one's even thought of yet.

In other words they make sense. And not just in smartphones and TVs, but in wearables, allowing the screen to extend around your wrist or simply to better fit its contours, as already seen in the Samsung Gear S.

They're here and while their rise has been slow they're gradually being attached to more compelling devices. And as they become more compelling they're not suddenly going to disappear, quite the opposite, they're going to take off.

It might take a while, but there was a time not so long ago when tablets were looked at sceptically. This is no different.

Curved smartphones are the future and while I'm not convinced that 2015 will be the year they go mainstream it won't be too long from now that we're wondering how we ever got by with a primitive flat screen.