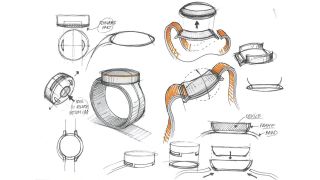 OnePlus told TechRadar back in 2015 that it had once been working on a wearable but scrapped the idea at the last minute, and now a new rumor suggests the company may have rebooted its ideas for a smartwatch.

Specifically, a tweet has hinted at OnePlus being the next phone manufacturer to enter the wearables space. It comes from a writer for TechPP who used the OnePlus Never Settle motto to hint at the company.

For all of you who have a fitness band right now, darlings, or are planning to acquire one shortly, I have two words: never settle.November 2, 2019

The tweet itself doesn't provide any details of specs or when we'll see it, plus it also refers to the device as a fitness band.

That may mean it isn't a smartwatch after all, but considering the company has been open about its development of a smartwatch in the past - including the photo you see above of the original ideas for the device - we wouldn't be surprised if this was just confused messaging over what type of device is coming.

PhoneArena has claimed there's information that the device may launch alongside the OnePlus 8 - although TechRadar couldn't corroborate this - so it may land in May or later next year, as that's around when we expect to see the OnePlus 8.

If this device does turn out to be a smartwatch, it may be that OnePlus reuses its idea of one with a circular screen as shown in the sketch above. We'll be sure to update you as soon as we learn more.