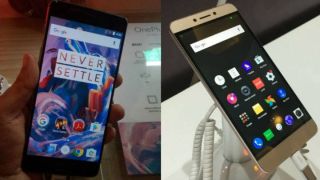 The OnePlus 3  was launched on June 14 in India, and is available on Amazon India at a  price of Rs 27,999. With the metal unibody and the all glass front, the  OnePlus 3 finally doesn't just have flagship level specifications, but also looks like a premium device.

Let's see how the two 'flagship killer's compete against each other.

The OnePlus 3 has a 5.5-inch fullHD optic AMOLED display, with a resolution of 1920x1080 pixels. The display is protected by Gorilla Glass 4 and has a pixel density of 401 ppi. In the day and age of 2K displays, a 1080p display at this price point is a little disappointing.

It's not exactly the same display as on the OnePlus 2, with the new handset boasting an AMOLED panel, giving you brighter, punchier colors. And OnePlus hasn't stopped there either, as it's tuned the display, creating something it's calling Optic AMOLED.

This means there's a greater emphasis on blacks and reds, which OnePlus believes makes for a better viewing experience, although for the most part it's not really noticeable - the screen is just clear and vibrant, making gaming and watching movies an enjoyable experience.

On the other hand, the LeEco LeMax 2 has a 5.7-inch, 2K (1440p) IPS display with a pixel density of 515 PPI. This is a huge improvement over the fullHD 441 ppi display found in the Le Max. It also has Corning Gorilla Glass 3 for scratch resistance.

As expected from such a high resolution display, the display is fantastic, with vivid colors, deep blacks, good viewing angles and adequate brightness levels.

While the OnePlus 3 has an incredibly vibrant display thanks to the Optic AMOLED panel, the Le Max 2 comes on top simply by virtue of having a 2K display, which just looks sharper.

The OnePlus 3 weighs 158 grams and has dimensions of 152.7x74.7x7.35 mm. In a departure from previous generations, the OnePlus 3 has an extremely sleek and svelte all metal body made of anodised aluminium. It is available in two colors, Graphite and Soft Gold, out of which Graphite is available to buy as of today, while the Soft Gold variant will be introduced soon.

The Le Max 2 though, looks identical to it's predecessor, with a full metal unibody design that looks and feels very premium. The phone has glass on it's front and back, which makes the device look incredibly sleek and svelte. The build quality is fantastic, with no creaks or rattles.

Thanks to it's metal chassis, the Le Max 2 weighs a rather hefty 185 grams, with dimensions of 156.8 x 77.6 x 8mm. Overall, in terms of build quality and design, the Le Max 2 can easily challenge smartphone more than twice it's cost.

While both smartphones look fantastic and have an impeccable build quality, i will have to give the edge to the OnePlus 3, as it just looks cleaner and more refined.

The LeEco Le Max 2 comes with a 21MP, f/2.0 rear camera with Optical Image Stabilisation and dual LED flash and a sensor size of 1/2.4" inches. It is capable of recording 4K video at 30fps and 720p slow motion video at 120fps. The front shooter is a 8MP affair with an aperture of f/2.2.

The One Plus 3 runs on OnePlus's own Oxygen OS running atop Android 6.0.1 Marshmallow. Oxygen OS is smooth and light, and refrains from the heavy customisation followed by skins of other manufacturers.

The Le Max 2 runs on LeEco's own EUI 5.6 running atop Android Marshmallow v6.0.1. Though fast and snappy, the extensive amount of customization done by Le Eco is not to everyone's tastes. The lack of an app drawer and notification shortcuts are major irritants. Rather, the quick shortcuts are located in the app switcher screen.

The OnePlus 3 easily comes out on top here, with a near stock android experience which is fluid and fast. EUI is coming of age though, and LeEco's content ecosystem gives it bragging rights.

The OnePlus 3 is powered by a quad-core Qualcomm Snapdragon 820 processor with two cores running at 2.2GHz and two at 1.6GHz. This is paired with an Adreno 530 GPU, 6GB of RAM and 64GB of internal storage. The device comes with a fingerprint sensor embedded into the home button, which is extremely quick and accurate.

The Le Max 2 is powered by the same quad-core Qualcomm Snapdragon 820 clocked at 2.15 GHz. It is paired with the Adreno 530 GPU, claimed to be 40% faster than the Adreno 430, 6/4GB of RAM and 32/64GB of internal storage. The device also comes with a fingerprint sensor located on the back, right below the rear camera.

On the connectivity front, the OnePlus 3 supports 4G LTE, 3G, GPRS/EDGE, Wi-Fi 802.11 a/b/g/n/c, NFC, GPS/A-GPS, GLONASS, USB Type C for charging and data transfer, dualSIM and Bluetooth 4.2. The inclusions of NFC is a big improvement over the previous generation, and along with the fingerprint sensor makes the device compatible with Android Pay.

Thankfully, the OnePlus 3 bucks the recent trend of excluding the 3.5mm audio jack as seen in the LeEco Le Max 2 and the upcoming Moto Z.

The LeMax 2 supports all of the same, although it lacks NFC and comes without a headphone jack. Audio is transmitted through the USB Type C port.​LeEco has come up with a proprietary audio transmission technology called Continual Digital Lossless Audio (CDLA).

While both smartphones feature top of the line internals and 6GB of RAM, the OnePlus 3 wins here due to two main reasons. First the 6GB variant of the LeEco LeMax 2 is overpriced at Rs 29,999 and secondly, the lack of a headphone jack in the LeMax 2 can be a deal breaker for some (Although LeEco includes a USB Type C to 3.5 mm adapter in the retail box).

The OnePlus 3 packs a 3,000mAh battery with support for OnePlus's 'Dash Charge' technology, which promises to provide a 60% charge in just 30 minutes.

The Le Max 2 comes with a non-removable 3,100mAh battery with support for quick charging. The company claims that a 5 minute charge can give upto 3.5 hours of talk time.

At Rs 27,999, the OnePlus 3 is more expensive than it's predecessors and is touching flagship territory. The OnePlus 3 ticks all the right boxes when it comes to killer specifications, good cameras and a gorgeous design, and is wholeheartedly recommended.

On the other hand, at a price of Rs 22,999, the LeEco Le Max 2 is also a compelling buy. It comes with the incredibly powerful Snapdragon 820 processor + Adreno 550 GPU combination, has a killer display and comes with a 'revolutionary' CDLA audio technology. The lack of a headphone jack though might be a deal breaker for some.

However, the 6GB of RAM + 64GB of internal storage combo comes at a whopping Rs 29,999, which does not seem to be such a value for money buy.

For people who must have a device with 6GB of RAM, or are looking for a premium smartphone experience, the OnePlus 3 is heartily recommended. However, the 4GB RAM variant of the LeEco LeMax 2 gives you slightly lower specifications with a fantastic design at just Rs 22,999, and might be the sensible option for those wanting to spend a little less.