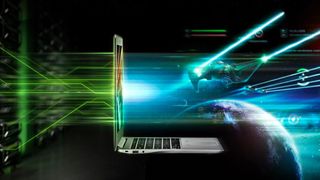 Nvidia’s GeForce Now streaming service is now out and already impressing us, and now benchmarks have emerged giving us an idea of the hardware used to remotely power games streamed over the internet.

As you can imagine, GeForce Now uses Nvidia’s own RTX GPUs – and according to to leaked benchmark results by Twitter user TUM_APISAK, GeForce Now is using a unique graphics card called Nvidia T10-8. This card isn’t available for regular customers, and appears to be based on the TU102 die, which is the Turing architecture found in GPUs like the RTX 2080 Ti Super.

It also comes with 8GB of vRAM.

Meanwhile, it looks like GeForce Now users have access to another rather unique component: an Intel CC150 processor with eight cores and 16 threads.

As Wccftech suggests, it looks like GeForce Now is splitting the CPU into two instances with four cores each, effectively giving GeForce Now users access to a quad-core processor with 8 threads.

Due to the nature of streaming services like GeForce Now, Nvidia needs to share the hardware amongst users accessing the service, and the speculation is that Nvidia could be cleverly grouping together players of relatively simple games with players of more demanding games in these ‘nodes’, so that more power and performance can be delivered to the gamers playing the more graphically intensive games.

Each user also gets access to 14.3GB of FPM (fast page) RAM. While these specs aren’t going to challenge the best gaming laptops or gaming desktops any time soon, they are more than enough to run most games at 1080p – which is the target Nvidia is aiming for with GeForce Now.

The benchmarks that have been shared are for Ashes of Singularity, and they show the GeForce Now hardware managing a score of 2,600 in the game using the ‘Crazy’ graphics preset, and at 1080p resolution.

It also records an average frame rate of 27.1 FPS. While this isn’t mind-blowing, it’s enough to run the game remotely at a playable rate. Plus, when you start using GeForce Now on older and under-powered devices that usually wouldn’t be able to achieve those kind of results, it suddenly becomes a lot more impressive.

On paper, these specs and results probably won’t pose too much of a challenge to the next generation PS5 and Xbox Series X consoles, but we’ve found the GeForce Now is an affordable and convenient way of getting new games into people’s homes without having to buy new hardware.

Nvidia can also keep upgrading the hardware in future to offer even better results – something we hope the company delivers on. It’s certainly an interesting time for gamers.

This could certainly mean that the PS5 and Xbox Series X end up having to compete with GeForce Now when it comes to convincing gamers to shell out for expensive hardware.