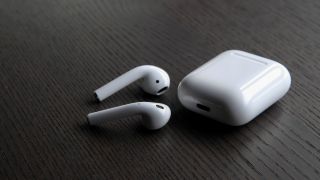 A new report claims that an upgraded AirPods model – called the AirPods Pro, in the manner of the iPhone 11 Pro – may be about to release to market.

An incoming AirPods Pro release was cited in a report by China Economic Daily, which said the new AirPods were expected to launch before the end of October, meaning the claim could be proved (or dismissed) very soon.

We've heard a lot of speculation and rumors around the AirPods 3, though the Pro model would likely sit alongside the base model for those seeking more premium features. China Economic Daily says that the AirPods Pro will come with active noise-canceling, which is lent credence by the mention of "with or without noise-canceling" audio settings in code for the iOS 13.2 beta.

A previous story by the outlet says that the next AirPods model could feature a new metal design to help with heat dissipation – so there could be a new feel and and form to the AirPods beyond the tech hidden inside.

It's worth noting, too, that the current-generation AirPods got a price cut across retailers this week, which could signal a new model on its way shortly.

That's a decent step up from the 2019 AirPods' $159 / £159 / AU$249, which is already pretty expensive for true wireless earbuds, when there are certainly cheaper options available – some with similar performance. But if you're after an Apple model, or active noise-canceling is what you're after, the upgraded AirPods Pro may get your bet in the coming weeks.