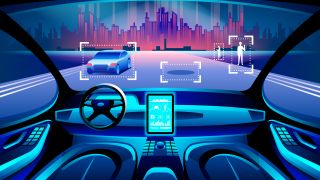 However, the San Cupertino-based company has been catching up fast in recent months, and if a new patent by the tech giant is anything to go by, the integration of AR (Augmented Reality) into the navigation app could help it finally eclipse its biggest rival.

According to Cult Of Mac, Apple has applied for a patent titled 'Navigation Using Augmented Reality', which outlines changes to Apple Maps that would "overlay route information onto live views of the road ahead of the car".

This would require the driver's iPhone to be mounted on the car's dashboard, with the camera pointed at the road ahead.

The driver would then see real-time views of their route overlaid with navigational information – for example, speed limits, directions, and street names.

Why would this be useful? Well, navigation apps tend to display an illustrated top-down view of the road ahead, which Apple thinks can be difficult for drivers to square with the real world in front of them.

The description of the patent explains that, "by superimposing the navigational layer over the captured images, the user can clearly and easily understand which lane to be positioned in without having to decipher how general symbols correlate with the real world.”

As Cult Of Mac suggests, this feature could work with augmented-reality glasses, although this technology hasn't exactly taken off, and there are potential safety concerns associated with drivers having their fields of vision blocked by computer-generated symbols.

As with any patent, there's no guarantee that AR navigation will ever come to Apple Maps – but if it does, it could give the app a much-needed boost ahead of its Google-made rival.

Via Cult Of Mac