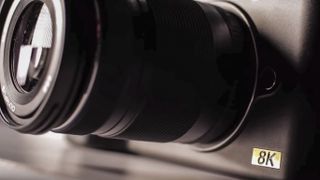 Sharp has surprised us all at CES 2019 by quietly previewing a 8K cinema camera aimed at consumers.

First spotted by Kinotika, on the Sharp stand at the show, the new camera is currently simply known as '8K video camera' – so hopefully between now and its official launch Sharp will come up with a more exciting name for it.

Like the Blackmagic Pocket 4K Cinema Camera (what is it with the boring names?), Sharp's new video camera features a Micro Four Thirds sensor and lens mount, so it can enjoy a range of optics from both Panasonic and Olympus, as well as other third-party manufacturers.

While the Blackmagic camera can shoot 4K at up to 60p, Sharp's new video camera can shoot in 8K at 30p using the H.265 codec. If that's not already impressive, Sharp is talking about getting that up to 60p, while the camera is also said to feature in-camera stabilization, although at the moment it's not clear if it's going to be in-body stabilization or an electronic system.

What else do we know? Along with the headline-grabbing 8K resolution, the new Sharp video camera also sports a large 5.0-inch display. While this matches the size of Blackmagic's screen, Sharp's one has the edge as it's hinged at the side, allowing the display to be pulled out away from the body, which will surely make it a tempting proposition for vloggers with deep pockets (more on the price in a moment).

That's about it for specs, with Sharp also noting that these could change prior to the camera's official launch at the NAB 2019 show at the beginning of April. As for the cost, it could be under $5,000 (around £4,000 / AU$7,000) – that's quite a bit more than Blackmagic's 4K Pocket Cinema Camera, but then this is capable of shooting 8K.