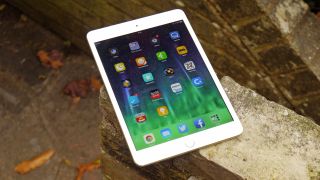 Amid a record-smashing March quarter, Apple had one party pooper.

The iPad continues to lag: it only sold a measly 12.6 million units over the last three months, a significant drop from the quarter previous (which was, of course, the holiday quarter) and a 23% drop year-on-year.

"Have we had cannibalization? The answer is yes," Cook said when asked whether the iPhone 6 Plus is hurting the iPad. But it goes beyond just the new larger iPhone.

"We're clearly seeing cannibalization from iPhone and, on the other side from, Mac," he added. "As I've said before, we've never worried about that."

Cannibalization is a familiar theme running through Apple's product history, and as Cook alluded to on today's call the company's M.O. has always been to not put too much weight on it.

He took a laid-back position on the current iPad sales issue.

"It is what it is," Cook said. "It will play out and at some point it will stabilize. I can't say exactly when, but I'm pretty confident that it will."

Cook said also said the company needs to not have an inventory correction when it comes to iPads, something that would offer relief for the tablet's sales.

On Apple's partnership with IBM, launched last year to bring iDevices deeper into the enterprise space, Cook said the partnership is "still in the early stages as far as bearing fruit."

"I still am a big believer for iPad to play in a major way in enterprise," Cook said, indicating that's where Apple wants to focus future iPad growth.

The company is rumored to be working on an iPad Pro designed more for businesses, and Cook's comments indicate the device could be well on its way.