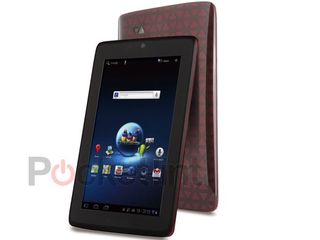 Interesting back panel for the ViewSonic ViewPad 7x

ViewSonic could be about to unleash a tiny Honeycomb terror in the form of a 7-inch tablet dubbed the ViewPad 7x.

Set to be unveiled at Computex at the end of May, according to 'reliable sources' speaking to Pocket-Lint, the tablet will be the first 7-inch Honeycomb slate.

The new ViewPad is not said to be replacing the existing ViewPad 7, but it's not yet clear if it will launch with Android 3.0 or the newly-announced Android 3.1.

Honey, I shrunk the tablet

We haven't exactly been caught in a deluge of Honeycomb tablets since its launch earlier this year, with the Motorola Xoom and Asus Eee Transformer the only real options at present, although the LG Optimus Pad and Samsung Galaxy Tab 10.1 are hot on their heels.

The similarly-sized HTC Flyer is set to get a Honeycomb upgrade at some point, but the company hasn't been forthcoming with exactly when.

With sources suggesting that the ViewSonic ViewPad 7x UK release date could be as early as June, HTC might want to get a bit of a wriggle on.