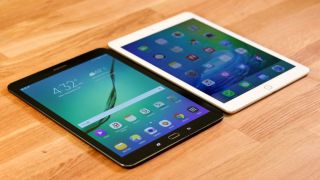 Ever thought your tablet was too big for your bag? Samsung has filed more patents which could see slates that fold and fit in your pocket.

It would allow for a large screen tablet to fold over in half, much like a book. The patent features a side-screen similar to that from a Samsung Galaxy Edge phone.

That may mean you'd be able to customise the shortcuts included on the side of the phone.

The new patent describes how the technology would allow the user to enter different modes when unfolding the tablet. For example, if you wanted to boot the camera app you'd be able to press on a certain part of a side screen to unlock it.

It also shows a way to unlock the tablet with a passcode down the side screen of the tablet.

The idea would be to make an image appear between the two sides of the screen so you won't need to snap the tablet out fully to check your notifications. How exactly that would work is currently unclear.

Don't expect the Galaxy Tab S3 to have this on board – but it's an interesting application of foldable screens and Samsung did file this patent back in November 2015.

This isn't the first time we've seen patents for foldable tablets though - one rumor even dates back to November 2013.

It may one day mean you'll have a 10-inch tablet that can actually fit in your pocket just like your phone.