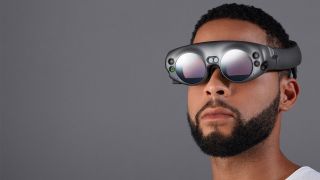 It's been a long time coming, with whispers of the headset being little more than vaporware along the way, but the naysayers could be about to be silenced – Magic Leap finally has a release window.

The mixed reality Magic Leap One: Creator Edition will launch later this summer (so by around the end of August), the company revealed during a dev chat on Twitch.

However, it fell short of revealing an exact date, or a price for what's expected to be a premium headset. With the range of sensors and apparent quality of the performance set to be high, it's thought Magic Leap could rival the expensive early HoloLens pricing.

So, what's inside the Magic Leap? That's also shrouded in mystery, but there's now a little more to go on, with the company suggesting that it'll be a reasonably powerful device, packing in a Nvidia Tegra X2 SoC.

That's a mobile processor capable of packing a punch, which may raise concerns over the wireless headset's battery life. But Magic Leap insists power draw will be variable depending on the demands of the experience for which it's used.

With gesture tracking, eye tracking, motion tracking and more going on, it'll be up to developers to fine-tune exactly what's needed to get the most out of their software, and keep that battery ticking over.