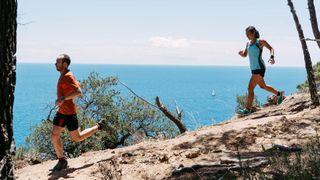 It’s been a whole year since my marathon diary of 2017 (shockingly) and 365 days ago I asked members of my running club St Albans Striders, with hundreds of members, what their attitudes to technology were.

Well, I thought that it was time to hand over the floor to other enthusiasts to see what they thought about the role of technology in running - and while things are quite similar, there are some small, but perceptible changes in attitude.

While everyone is still using running watches and headphones to trot around, and nobody has bought a pair of smart running glasses (as they don’t really exist yet) - the brands are shifting and the desires for tech to help out are altering too.

What tech do you use when running, and why?

“I’ve been using the Garmin Forerunner 735XT, as I wanted something that would cover running, swimming and cycling an it was on offer. So I went from Garmin 235 to Garmin 735XT, mainly for the swimming element,” says Mike Dando.

The Garmin theme is incredibly strong from the running club - every person bar one is using a device from that brand, showing that its upward trajectory and lowering of the price of older models is having a strong effect.

“I’ve recently upgraded from the Nike Apple Watch Series 2 [...] to the Garmin Forerunner 235. My main issue with the Nike Watch was the battery life as didn’t last on my long runs - that’s not something I want on my first marathon,” says Magdalena Petrus.

It’s interesting this is seen as an upgrade - the Nike Apple Watch is far more expensive, but for the serious runner the shorter runner and the lack of Strava integration from the main workout app is something of a hindrance.

“I use my iPhone for music/podcasts, and the map function comes in handy when I get lost!” says Jenni Johnston.

“The Find My Friends app useful for my other half to know where I am, or he uses it to track me on a long run, then he and the kids pop up as a mobile cheering squad en route!”

It’s interesting that this is used, as Garmin offers a LiveTrack mode to do the same thing - but Find My Friends doesn’t have to be activated each time, so could be seen as a more frictionless option. And not everyone is a fan of Garmin, despite sticking with the brand:

“I upgraded from a Garmin Forerunner 920XT (it stopped working even though it’s not very old) to a Garmin Fenix 5s, mostly because I wanted a change and couldn’t be bothered to send it back. But Garmin online support is useless,” says Katherine Caris-Harris.

Do you like the idea of tech being used on a run?

“There’s a danger of being too reliant on tech and not just running to feel. But I like Strava and knowing what everyone is up to,” says Jenni Johnston.

Many people don’t like the idea of technology when they run - it gets in the way of the pure enjoyment of the activity, and doesn’t allow them to experience the world around them.

The feelings on this were mixed from the club, but compared to last year there’s definitely more of an acceptance of the tech used to aid running.

“Tech definitely helps me in terms of tracking progress, helping to try and pace myself for longer runs. I also like all of the data that it delivers via the [Garmin Forerunner 735XT], the app and the links to Strava,” adds Mike Dando.

“I’ve always been in early adopter of sporting technology, and I like what you can do with today’s current gear for tracking, testing, assessment work and the social aspect,” said Rav Dighe, a triathlon coach with Aloha Tri.

He also uses the Stryd power meter, but mostly for professional assessments - it’ll be interesting if more people start using these in the next year or two, especially as these can be used with Zwift Running on treadmills too.

“It’s a blessing and a curse knowing how fast (or more usually how depressingly slow!) I am running,” says Helen Cartlidge. “I like having a record of training but even on older Garmin Forerunner 220 there are lots of geeky stats that I don't worry about.

“My rule for racing is that I can only look at my watch at a mile or kilometer marker, so I don't check the time at parkrun (a weekend 5k race that many participate in).”

But shout out here for some technology from 2004:

“I remember being really excited when a friend got an early Nike Triax, as you could set it to beep for splits so you knew if you were on pace. We did a lot of track training so we'd use it then and it seemed like the coolest thing ever!” says Jen Conway.

“Since I was injured last year, I've deliberately not used my watch to check time/manage pace during runs - this was originally going to be until I got back to vague fitness but I'm going to stick with it as much as possible.

“I see the benefits of pace-checking for a half marathon or full marathon but I think after years of running without a watch, I had got a bit caught up using it and found I could psych myself out if I saw a km split that was 10 seconds off desired pace.”

What one thing would you like to see invented to help you run better?

This section is always the most illuminating of the survey - finding out what people would love to see in running tech, and then realising it can already be found (at least in part) on sale already.

But the marketing or price points are too prohibitive, so they just take years to find out about these cool news things.

“I would love to see (or hear more specifically) a bit of tech that can give you a bit of guidance on pace, effort etc rather than just a pace alert,” says Tony Barr.

“Some sort of artificial intelligence, which would be more like a virtual coach. Given the watch knows heart rate, cadence, pace and gradient it should be able to give some reasonable advice and guidance”.

It seems that the team behind the LifeBEAM Vi  need to do some better advertising on their headset...

“My Garmin tells me that based on my training data I should be running a 3:15 marathon. This is fantasy sadly! But as I’ve not run one for several years it would be great if it could give me a realistic expectation as then I could plan my race strategy accordingly,” says Caroline Bailes.

This is something that’s been echoed throughout the survey and is the biggest failing of the Garmin watches - by taking your VO2 Max score, which it works out through heart rate, the predicted times are just wildly inaccurate.

If you train hard and get closer to your predicted marathon target, then your fitness increases and the time drops. It’s very hard to get anywhere close to it.

And here’s something interesting from Jen Conway:

“I’d love a watch that plans you out a route of a desired distance when in new areas - and helps you find your way back to your hotel when you get lost.”

This is possible already with the RunGo app on the Apple Watch - although there aren’t a huge amount of runs on there for free. And talking of things that exist...

“Something to tell me when my form has deteriorated and what to do to fix it,” adds Jen Conway. This is, again, in the current range of Garmin watches, with your training load giving an indication on whether your fitness is increasing or not.

And finally - this note from Colin Baybrook, taking it back to the old school:

“Can you imagine the London Marathon (or any big race) without chip timing? Back to the old days of having to convince people it took you however many minutes to cross the start line.”