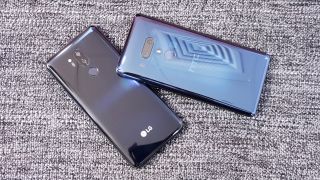 More new renders of the LG G8 ThinQ have been leaked, and they provide the most comprehensive look at the device so far.

These images come from respected leaker Evan Blass. Noteworthy inclusions are images of the top and bottom of the device, as other than pictures of the phone at an angle these are the only images we’ve seen showing the base and top of the device.

At the base we can see three speaker perforations, as well as a USB-C port and a 3.5mm headphone jack. The top of the device has no inputs or outputs, and in this regard the design of the device is similar to that of the LG G7 ThinQ.

The leaked design seems identical to images of a gray version of the G8 ThinQ leaked previously, showing features like the dual-lens camera and fingerprint sensor on the rear, and a large notch housing the front camera. The similarities between the renders suggest they could be accurate.

If these leaked renders are the real deal – and judging by Evan Blass’ track record they likely are – it shows the LG G8 ThinQ as a whole doesn’t vary in design a huge amount from the G7 ThinQ. It too had a larger front notch and its ports on the base of the device.

The main difference between the devices appears to be that while the G7 ThinQ had a central front camera and vertically-arrayed rear lenses, the G8 ThinQ renders show a front camera to the side, and the rear lenses arranged horizontally.

We’ll find out exactly what the LG G8 ThinQ looks like, and everything else about the device, at LG’s press conference at MWC 2019 on February 24. Check back to find out all about the LG G8 ThinQ and all the other devices we’re hoping to see, including the Samsung Galaxy S10 and the Nokia 9 PureView.