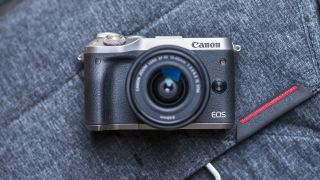 It’s not just the official marketing video for the Canon EOS 90D that was accidentally leaked on YouTube today – Canon Rumors has also discovered the promo video for the rumored EOS M6 Mark II, which was live for a short while on YouTube as well.

Photography publication DPReview says it was Canon Australia who accidentally posted the two videos on its official YouTube channel and, while they were promptly taken down, the sharpshooters at Canon Rumors have downloaded the videos and posted them to their own YouTube channel.

Like the video for the upcoming Canon DSLR, the one-and-a-half-minute long clip for the EOS M6 II also reveals the main features of the new mirrorless APS-C snapper, showing Canon has massively overhauled the original EOS M6 by adding resolution, speed and superior ergonomics.

Like the original EOS M6, this second iteration doesn't include a built-in viewfinder, maintaining the line's compact and lightweight form factor. Instead, there’s a removable OLED viewfinder that can be clipped onto the hot shoe if needed and will work with the touch-and-drag autofocus on the camera display when using Live View.

The addition of a dedicated MF/AF Focus Mode Switch button (manual focus/autofocus) on the rear of the camera also looks to be a welcome change, improving on the limited controls that appeared on the original M6 design.

Inside is a 32.5MP APS-C sensor – a decent bump over the previous 24.2MP resolution – and Canon's own Digic 8 image processor.

Burst speed has been doubled in the M6 II, which now boasts 14fps continuous shooting with AF/AE (autofocus/automatic exposure), along with the ability to capture 30fps RAW bursts using the electronic shutter. Canon’s Dual Pixel AF with eye detection is also on board.

The official announcement for the EOS M6 Mark II was rumored to be August 28, alongside the EOS 90D, so there’s probably not long to wait before everything is officially revealed.