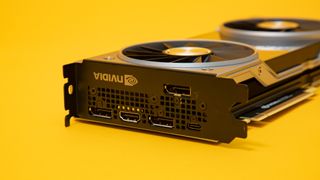 Nvidia’s GeForce RTX 2080 Super is due to launch tomorrow, but we’ve just caught a glimpse of its potential performance thanks to a benchmark leak.

The leak is from Twitter denizen TUM_APISAK (who often shares GPU-related leaks) and shows a Final Fantasy XV benchmark of 8,663 for the RTX 2080 Super running at 1440p resolution in high quality.

This compares to a score of 8,058 for the vanilla RTX 2080, meaning the Super version is 7.5% faster in comparison. Of course, this is assuming the benchmark is genuine, and we also have to take into account that a single test score far from paints a full picture of performance.

There may be some disappointment in seeing that figure, however, for those who might have been hoping for a beefier 2080 Super which gets closer to the performance of the top-end RTX 2080 Ti (which scores 9,921, and therefore is almost 15% faster than the 2080 Super here).

Still, realistically we were never going to get something that approached 2080 Ti performance levels – that just wouldn’t make sense for Nvidia – but going by this purported result, a more pressing question is: how does the 2080 Super compare to the 2060 and 2070 Super spins?

In our reviews and testing, we found that the 2060 Super was around 9.5% faster in Metro Exodus at 1080p resolution, and around 11% quicker in 4K (also, remember with this GPU you are also getting upgraded video memory from 6GB to 8GB, which is a pretty important step forward – a fair bit of flak was directed at the original 2060 for not going with 8GB of video RAM).

The RTX 2070 Super was 16% and 13% faster than the plain 2070 respectively in the same Metro Exodus tests, and other results indicated bigger jumps in some cases for both these GPU upgrades.

So that 7.5% frame rate increase in Final Fantasy for the RTX 2080 Super looks perhaps just a tad lackluster, although of course we’re not comparing apples to apples here, and as we’ve already noted, we can’t draw much of a conclusion from a single leaked benchmark.

Another interesting point is that going by this benchmark, the card which the RTX 2080 Super is closest to is Nvidia’s Titan V (8,841), a Volta GPU which cost over four times as much as the Super (yes, three grand) when it emerged at the end of 2017. And that just shows you how swiftly performance levels are being ramped up in the GPU world these days.