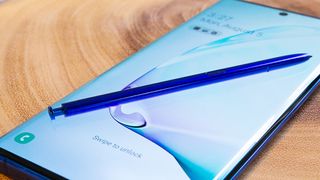 The launch of the original Samsung Galaxy Note back in 2011 (which is a worryingly long-ago time now for some tech journalists) was notable because it saw the launch of a frankly gargantuan phone.

A 5.3-inch screen? Massive. Too chunky. Nobody would ever want that. Surely... surely? In fact, the only thing going for it was the fact that it came with a stylus, something that allowed you to take notes and annotate on that insanely large screen.

The S Pen had arrived – and it would come to not only define a genre for Samsung, but allow the brand to differentiate between the 'standard' Galaxy S range and Note line-up more effectively, meaning more revenue and products in the hands of consumers.

For the TechRadar fans out there, please watch this video of then-Deputy Editor Marc Chacksfield uttering a mistake around the name of said stylus that will forever dog his career:

Actually, Samsung refused to even allow it to be named a stylus. It was the S Pen, imbued with more power than the little plastic-and-rubber sticks that were stuffed into the PDAs adorning boardrooms the world over.

Back then, it seemed like that insistence on naming it the 'S Pen' was simply Samsung trying to pompously inflate the impact of a bit of plastic.

Over the years, though, the smarts built into the S Pen have made it a real draw in its own right, and the launch of the Galaxy Note 10 cranked things up another couple of notches.

Let's take another trip down memory lane – I promise, I will get to my point about Samsung's latest launch soon – to when you first encountered the Nintendo Wii's controller, the Wiimote. Even if you never held one of Nintendo's revolutionary motion controllers, you probably saw what they did on adverts or heard from friends.

If you were fortunate (or unfortunate) enough to spend time with a grandmother who was so skilled at Wii Sports Archery that you considered signing up for the Olympics, you'll know that a controller that could monitor the movement of your hand was incredible.

This was another world of control, being able to move virtual objects in 3D space, that took things to an entirely new level. It still gives me a shiver of excitement to remember that moment – when, finally, there was a correlation between what your body did and what appeared on screen.

That feeling never left, merely going dormant, and seeing what Samsung did to the S Pen this year (adding in motion sensitivity through six-axis technology) brought it screaming back.

What did this mean? The ability to play games in three dimensions? A perfect controller for the world of virtual reality (VR)? The chance to sketch in augmented reality (AR), the combination of the real and digital worlds?

Well... no, not really. The main functions demonstrated to us were the ability to change the camera settings from afar to get the perfect selfie, and someone showing a presentation on their phone and not having to touch the screen to scroll through.

These aren't really ground-breaking features. They're basically upgrades on what the S Pen was always able to do: before it could take a picture by pressing the button on the side of the stylus, or flick through slides without touching the phone (if you had the right elements installed).

I want more. I need more from my tech these days – especially at the sky-high prices Samsung is charging. The world of smartphones is constantly being lambasted for not really adding much to the mix with each new iteration, and a motion controller that slots into the side of one of these things feels truly exciting, like it'll give the phone all new capabilities.

Except... it doesn't really bring much new, does it? Even if Samsung had brought out a couple of motion-controlled games at launch, being able to control the phone from afar isn't that useful when the screen is smaller than seven inches – you can't see the level of detail needed when you move a meter or two away.

Like so many things unveiled in today's 'beta culture' where things are launched before being fully ready, Samsung announced it was opening up the software developer's kit (SDK) to those who wanted to build motion-based S Pen functionality into their future apps.

That's where things could get exciting, but it depends on developers actually doing something with it, and there's no indication that's going to happen just yet.

So what could the future hold?

While it seems a bit odd to talk about such a small part of the launch, the motion-controlling S Pen still feels like a big jump forward to me. When you consider that you've, essentially, got a magic wand slipped into the phone, that's pretty cool.

It only requires an inexpensive cable to connect the phone to a large-screen TV (or even, increasingly, wirelessly) and that's when things get more amazing. You can pop around to a friend's house, drag your phone out of your pocket and be playing a motion-controlled game in seconds.

Or you can slip on a pair of AR glasses and be able to control the world around you from your own hand – no need for a special glove or hand tracking when your phone is bopping around with the perfect tool inside for such a feat.

Those worlds would be dramatically enhanced with motion control, and Samsung putting said tech inside the S Pen feels like the start of something massive...

..if the developers get on board.

That's the big thing, isn't it? Third-party companies need to start using these S Pen capabilities. Independent developers need to show the power it brings, to start a community around the motion-controlled S Pen.

The S Pen needs to be seen as the start of a world where motion control devices are ubiquitous – and as long as Samsung starts to really harness that idea (and incentivizes others to get on board) then this could be the moment where motion control really went mainstream.