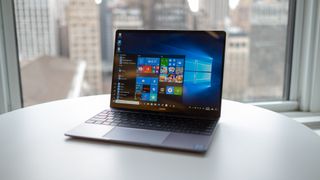 Huawei CEO Richard Yu has confirmed an indefinite hold on the release of a new MateBook laptop, CNBC reports.

Huawei is a brand still making a name for itself in the US, even though it's already made some of the best laptops and best phones. One thing that's likely making it more of a household name is the ban imposed on Huawei in the US.

Earlier this year, the Trump administration put Huawei on its 'entity list,' which limits the work Huawei and US companies can do together. While Huawei builds much of its products, it still largely relies on US companies for key elements, like Microsoft and Google for the Windows 10 and Android operating systems.

The ban spells trouble for many of Huawei's products. Owners and potential customers of Huawei smartphones had to face the prospect of no longer getting access to the latest versions of Android.

New phones would even lose the ability to access Google's Play Store, severely limiting access to the most popular apps. The ban has put a damper on Huawei's plans to be the top smartphone vendor, not to mention its plans to expand its 5G development.

The hold doesn't necessarily mean that the new MateBook will never launch. There are already some moves towards a resolution of the ban, with a temporary lift that went into effect May 20. It may not be sure enough footing for Huawei to go ahead with major product launches, but it could be enough to signal that the ban is more a part of the US-China trade war than any permanent ban specifically targeted at Huawei.

If the ban goes on long enough, the planned MateBook is sure to be abandoned. As MateBook's are high-end products, a model built on current hardware is unlikely to launch a year from now with the same hardware. So, unless the ban is resolved quickly, it's possible we'll never see the planned MateBook. Instead, we would have to wait for a freshly designed, post-ban MateBook to launch when the US and China are, well, mates again.