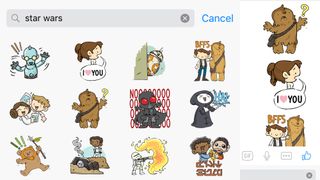 Facebook has released Star Wars stickers on its Messenger service to celebrate the imminent launch of the new film, The Force Awakens.

The 'toons offer a variety of options from, including a bunch of original characters as well as new faces such as Finn, Kylo Ren and BB-8 - all in cute and cuddly cartoon form.

The animations were designed by cartoonist Katie Cook, and all of them can be downloaded for free, meaning you can tell your friends just how 'Jabba' 'Jabba' 'Stormtrooper' you're feeling when standing in the cinema queue next week.