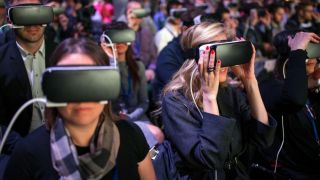 Almost one year to date from the launch of the Oculus Rift (and the HTC Vive’s anniversary following shortly after) it’s not just a good time to look back on how far virtual reality has come since 2016, but also to start looking ahead to what’s coming over the horizon.

More so than most, Intel has a lot going on when it comes to VR, and the tech firm has more than one initiative in place to ensure strapping on headsets isn’t fated to become a fad of yesteryear.

These initiatives include iterating on the tech trailblazed by the likes of the Rift and Vive for a larger audience, expanding VR’s consumer potential alongside concurrently growing world of eSports, and looking even further with a new kind of headset that brings the real world with you.

What does the future hold for virtual reality? Well, like any popular tech, it will involve taking frequent trips back to the drawing board, all in the hope that...

Considering the consumer versions of the Oculus Rift and HTC Vive ‒ the forerunners of modern VR ‒ are barely a year old, a major hurdle for the trending technology is an inevitable one: bleeding-edge tech is expensive and also very, very understocked in terms of content.

“The excitement is just phenomenal all across the industry ‒ hardware, software, everywhere in between ‒ but we still have a relatively small number of people who have actually brought headsets home,” Lee Machen, Intel’s general manager for gaming, VR and AR sales tells TechRadar.

Given the expensive price points and reliance on pricey PCs to power them, it’s understandable that headsets like the Rift and Vive are hard sells to anyone but the most eager of early adopters.

However, Intel hopes that as developers continue to work on new experiences and features, more customers will become interested in buying a headset, which in turn fuels the development of profitable VR experiences.

This expedited cycle is already showing signs of existence with Oculus’ Asynchronous Spacewarp technology, which synthesizes frame of animation in a VR space to not only smooth out the experience, but also allow more mainstream (read: more-affordable) PCs to join in on the action.

But innovation isn't limited to software – the addition of more headsets to the market this year is expected to also bridge the gap between the more top-shelf headsets like the Vive and the cheaper-but-limited headsets designed for smartphones such as Samsung’s Gear VR and Google Daydream View.

“We’re working with Microsoft, who has announced several partners that will be bringing mainstream headsets to the market as well,” says Machen, “and by mainstream I mean in both a lower price point and a lower level of hardware performance required for a PC-tethered headset.”

Microsoft unveiled its first wave of Windows 10 VR headsets earlier this year, with developer kits going out to creators during this year’s GDC and big names like Acer, Dell, HP, and Lenovo all potentially releasing a mid-range headset of their own.

Going off the relatively affordable price of the development kits, these headsets are expected to greatly lower the cost of entry into VR ‒ something Intel is happy to supply its tech to because, let’s face it, VR is the quintessential “you just have to try it to get it” kind of experience.

How eSports can up VR's game

Following the old adage about putting a finger in just about every pie, Intel has several other growing fields it’s invested in alongside virtual reality. One of these fields is the rapidly growing industry of eSports ‒ a field that Intel sees growing because of VR, not just alongside it.

This year’s Intel Extreme Masters world championship series in Katowice, Poland marked Intel’s 11th season in sponsoring the Electronic Sports League (ESL) sanctioned tournament. A prize pool of $650,000 was awarded to the world’s best Counter-Strike: Global Offensive, League of Legends, and StarCraft II players as over 173,000 fans rooted on their favs in person in Katowice’s Spodek stadium. A whopping 46 million online viewers joined in the cheers online, making it one of the most-watched events in eSports history.

The massive turnout at the Spodek naturally intertwines with VR, giving Intel and opportunity to show off what its work in VR means for gamers, especially when considering that the still-growing audience of eSports is one that’s already quite familiar with peak gaming equipment.

"The gaming community's passion for eSports was on display and Intel is proud to continue delivering the best gaming experiences to fans around the world,” Soqui continues, “whether that's with IEM tournaments, driving growth in VR content, or improving how people play with Intel processors and technology."

A more direct way to tie VR and eSports together comes courtesy of Intel’s partnership with streaming service Sliver.tv ‒ a way for eSports fans to catch a 360-degree view of a heated League of Legends, Dota 2, or CS:GO match live from right inside the game.

ESL Product Manager Stuart Ewen explains that bandwidth is practically the only hard limit for what’s possible with Sliver.tv, with not only high-powered headsets like the Vive and Rift being able to view the action, but also mobile devices.

Sliver.tv’s Live Cast technology also enables real-time replays and highlights to be produced in just a matter a seconds, making VR an increasingly possible (and potentially attractive) method for spectating sports both electronic and conventional.

Speaking of growing technologies, Intel’s other VR initiative takes things one step further by taking the real world around you and combining with what’s going on in your headset, effectively creating a newly "e-merging reality."

Developing alongside virtual reality is augmented reality ‒ a technology that also holds so much potential that Apple’s Tim Cook sees it as the next thing to usurp the smartphone.

While AR hasn’t had much time in the public eye since the heyday of Pokemon Go last summer, Intel sees the technology as the key to another major project, and here’s where the phrase “merged reality” comes in.

Soqui describes merged reality as the middle section of a Venn diagram with VR and AR on each side ‒ a blend of virtual reality technology incorporating real-world elements and augmented reality.

Intel’s proof of concept for how merged reality can shape headsets is Project Alloy, which merges VR and AR technology, along all the necessary computing components, into a single wearable device.

Using Project Alloy, a user can walk in an environment such as their living room untethered, all the while scanning their environs to create a game world that based the real one they inhabit. For example, couches and end tables in your home could be scanned and reinterpreted in a shooter game as cover, making them interactive (as well as tangible!) parts of the experience.

Though still in prototype, Project Alloy shows Intel’s long-term plans for virtual reality and what high-end headset technology is capable of. And while it may be a while before we can strap on a pair of goggles to instantly transform our bedroom into a haunted house or sci-fi hangar, concepts like Project Alloy make it loud and clear that it’s just a matter of time.

Until then, it’s up to developers and consumers to interact, finding the next big VR smash hit, refining the experience for the end user, and optimizing the tech lower VR’s barriers of entry, such as the dreaded “VR sickness,” high price points, and other common growing pains of the advancing technology.