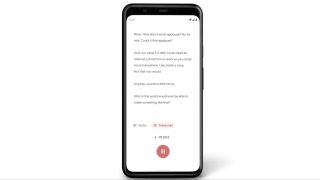 In the run-up to today’s Pixel 4 event Google was leakier than a fishnet stocking full of soup. One of the things that fell out was Google Recorder, which made its way into some people’s hands before it was officially unveiled on stage.

It might not be a big surprise anymore, but it looks like it’s going to be a big deal.

Google Recorder is going to be a brilliant tool for students, journalists and anybody else who needs to record and transcribe speeches, lectures or interviews – and the good news is that while it was unveiled purely for the Pixel 4, it’s been tested on other Android devices too.

What does Google Recorder do?

Google Recorder records audio and converts it into searchable, editable text. It does it automatically, and it works offline. That’s a crucial difference between it and other voice recording apps, which either require an internet connection to do transcribing or just don’t offer transcriptions. You don’t even need to ask it to transcribe your audio; it does it automatically.

It’s important to take tech demos with a pinch of salt, of course, but what Google showed us was very impressive: the app appeared to work incredibly quickly with error-free results.

We’re sure it’ll be a bit more patchy in areas where there’s a lot of ambient noise, but given a good quality microphone and a reasonably quiet environment its performance should be excellent.

The app looks like a more Zen version of Samsung’s Voice Recorder and very much like the Voice Memos app that Apple ships with iOS. The first leaked version didn’t have transcription features, but it got those earlier this month in a significant pre-launch update. That update brought three killer features: transcription, exact match searching and audio classifiers.

What features does Google Recorder have?

The big selling point here is of course the transcription, something we’ve already seen from a number of online services. But real-time and offline takes it to a whole new level.

One key benefit of automatic transcription is that you can search your audio for specific things you or the speaker has said, which is what the exact match searching feature delivers. It enables you to search for a specific word or phrase either in the current recording or across all your recordings.

That’s going to be a boon for journalists whose interviewees tend to waffle, or for students whose lecturers take an eternity to get to the point, and it’s something other recording apps don’t generally offer.

The big benefit of these various features is attention. If you’re not trying to concentrate on making notes that’ll make sense or just be legible in the future, you can give all your attention to the person who’s speaking, not the notes you’re making.

The app enables you to search for specific sounds. According to Mishaal Rahman, who got their hands on an early version of the app, the audio categories the app can automatically recognize include Applause, Bird, Cat, Didgeridoo, Knock, Laughter, Music, Rooster, Phone and Whistling.

Language support so far is limited to US English, but more languages will be added soon.

When you’ve finished recording, the app enables you to tag it with your location and give it a title. In a nice touch it uses Gmail-style suggestions based on the audio it’s recorded, although you can ignore that and go for your own suitably memorable title instead.

Once you’ve done that you can share the end result as an audio file in .m4a format, the transcription in .txt format, or both together. Naturally you can save to Google Drive too.

When is the Google Recorder release date?

The app will be pre-installed on the Pixel 4, which goes on sale on the October 24. Plus it'll be free, so you don't have to pay to subscribe to the service.

What phones will Google Recorder be available for?

The official answer is just one, the Pixel 4: at the moment Google Recorder is going to be a Pixel 4 exclusive.

However, the APK file for the app has been leaked and seems to run on Android devices such as the OnePlus 5T, albeit with some issues. That suggests that the exclusivity is more to do with marketing than any technical tomfoolery, and that in turn suggest that Google Recorder will make its way to other Android phones eventually. The system requirements state Android Pie as a minimum.

If Google Recorder can come to other Android phones, we’d also expect an iOS version to follow along sooner or later. After all, Google wants to organize all the world’s information, not just the information on Android devices, and Pixels are just another way to get people using Google’s online services.

What other options are there?

Don’t forget the excellent Voice Typing feature in Google Docs, which does a great job of speech-to-text – although it does require an internet connection to work. And don’t forget to check out our round-up of the best online transcription services covers every platform, not just Android.