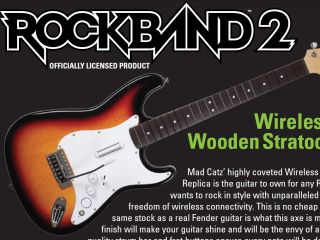 The launch of a quality wooden Fender Strat Rock Band controller could not have arrived at a better time, as we prepare for the latest bout of Beatle-mania to hit the UK later this month – what with the imminent launch of MTV's Beatles Rock Band from EA and the rumours of a major deal brewing with Apple and EMI.

Mad Catz is the first to launch an officially licensed Rock Band wireless wooden Fender Stratocaster replica guitar for use with the Xbox 360 version of the game, informing us that it "is a true 1:1 replica of the famous guitar"with "the body, neck, and headstock made from genuine Stratocaster wooden blanks, while the Tuning Keys and Bridge are built using genuine metal parts and fittings."

"Available in a hand-painted Three-Tone Sunburst design, the highly buffed gloss finish on each model is applied over an eight day period in the same manner as a genuine Stratocaster electric guitar and assembled at a Fender' manufacturing facility. The guitar neck sports a high-resolution 'Rosewood' finish decal, concealing two sets of premium Fret Buttons."

Be warned though, with a $300 price tag this really is only going to appeal to the hardcore!

For more check out Rockband.gameshark.com