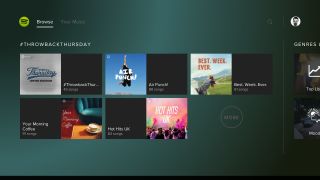 Something was always amiss about Music Unlimited. Whether it was its overpriced pass or its ties to the music publishing house for which it represented, it just felt like a rip-off.

Sony's decision to include it in the PS4 wasn't by any means surprising (it already starred as the proprietary music player on the PS3), but nothing felt more discouraging about the new piece of plastic than its dependence on a system that clearly wasn't working.

I wasn't alone in thinking that, either. Despite its presence on over 20 million PS4s around the world, The Wall Street Journal reported there were only about 100,000 subscribers to the music system.

So what did Sony do when it found out that only .005% of its overall user base was paying for the unpopular service? It did something unpredictable. It got rid of it for something better.

Even 'Unlimited' has to end sometime, right?

Starting today, Sony is officially launching a new service for PlayStation owners called PlayStation Music and it's run, developed and is generally made better by the team at Spotify.

I got a chance to check it out at a press event at Spotify's office in downtown San Francisco and while I had plenty of other comments, the one sentence that kept coming out of my mouth over and over was, "Wow, this is really intuitive."

During my demo I was given the chance to control the music from a phone (a Sony Xperia Z3, though I'm told any phone with Spotify and Bluetooth should do the trick), and when the phone was out of reach, I used a controller to seamlessly switch between gameplay and the new PlayStation Music app to pick out tunes.

Pressing the jewel on the controller brought up a new-and-improved menu that had a small array of playback and volume options which made it simple to control the music without going back to the dashboard. Everything seemed smart and clean and, well, intuitive.

But PlayStation Music is more than just a better audio streaming solution for fans of the PS4.

PlayStation Music represents the idea that nothing is permanent on a Sony system. It's almost like a message from Sony HQ that reads, "Anything that doesn't work right or doesn't live up to Sony's promise of 'Greatness Awaits' can and will be replaced with something that does."

PlayStation Music is a good first step in correcting a few lingering issues with the platform, Sony. But there's still work to be done.

There's a portable system that's floundering almost everywhere except Japan. There are still features on the PS4 controller that don't do anything new or creative. I don't mean to pick on a company that's released not one, but two uniquely innovative products in two months (aside from PlayStation Music, Sony also launched PlayStation Vue in three US cities), but if the winds of change are blowing it's time to air out all its dirty laundry.

There's a lot more Sony needs to do with the PS4 to give its users the best console on the market (a few more console-exclusive games wouldn't hurt) but, ultimately, PlayStation Music was a good place to start.