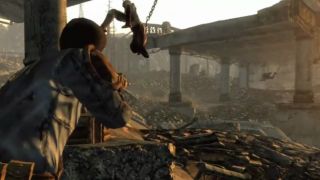 A blogger has published what he claims is the full breadth of Microsoft's plans for the Electronic Entertainment Expo (E3) in June.

According to the person, who published the information on Blogger under the name Robert MacRawley, Microsoft's announcements at its E3 press conference on June 9 will include Ryse 2, Forza Horizon 2, Halo 5, an anniversary edition of Halo 2, Battletoads and Perfect Dark reboots from Rare, Fallout 4, and more.

"This info comes from the highest source and contains near full details of Microsoft E3 2014 conference," MacRawley wrote.

Presumably he's not talking about Bill Gates or Xbox Head Phil Spencer, but he says "a number of sources" have corroborated his info.

So not really 'the highest source' then

Ryse 2 will reportedly ditch its Roman setting for the Middle Ages, and Halo 2: Anniversary will be a full visual overhaul and include bonuses like the PC version's extra maps and even the infamous demo level from E3 2003, which did not make it into the final game.

Meanwhile Fallout 4 will appear among other multi-platform games, including The Division, Call of Duty: Advanced Warfare, and an unspecified EA game, for which Xbox is either the lead platform or has a timed or exclusive DLC, MacRawley said.

In addition, Halo 5 will reportedly get a release date, Perfect Dark will be rebooted as a third-person adventure game like Uncharted, Epic Games will unveil an Xbox One exclusive based on its 2012 "Samaritan" demo, and Gears of War: Lazarus, Fable Legends, Quantum Break, Sunset Overdrive, and a new Crackdown game will appear.

Please don't take his word for it

Keep in mind that this information is coming from a source that no one's ever heard of and who could be making literally all of the above up.

That said, it all sounds quite plausible, so who knows?

Anyway, here are some footnotes: Microsoft will also reportedly introduce a new studio, Platform Next Games, which will unveil a tech demo for an upcoming game.

And the Games With Gold program for Xbox One will kick off, with one digital and one retail game per month free for Xbox Live Gold subscribers.