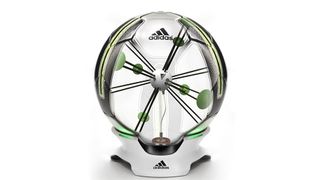 There’s nothing like the buzz of a great tournament - and this year’s World Cup has been up there with the very best - to make you want a slice of the action for yourself.

Well, thankfully with technology now at your fingertips, it's more interesting than having to round up a group of mates and forcing them to run drills and play with you in the part to help you develop specific skills.

These gadgets can not only improve your game, but help you get a deeper understanding of what’s actually happening.

Given we’ll probably be watching Robo-Ballers playing the Cyborg Cup in 2040, you might as well get on board with the technology now before the human game goes completely out of fashion...

There’s nothing like the feeling of strapping on a large sports bra to play a simple game of 5-a-side. You’ve probably seen professionals doing the same thing in training sessions and wondered what it is.

Well, it’s Playertek from Catapult - a sensor slotted into the rear of the harness to monitor your sprints, top speed and distance covered, while letting you compare said information with other team-mates wearing the same thing, or even globally if you think you’ve got the skills to do so.

TechRadar tried this technology in a five a side game, and it certainly makes you motivated to try harder, jogging off quickly at the end of the game to go and check out your stats and see how hard you worked.

We found that we were simply putting in more sprints to be the most ‘sprinty’ of all the players, and if that’s all that comes out of wearing this, you’ll at least have improved some way there.

It’s more used for professional teams than a five a side team, but it’s one of the cheaper ways to access this kind of technology.

Some teams have been wearing the vest underneath their shirts at the World Cup. Egypt, Serbia, Sweden, Switzerland and Uruguay have been using the vests to track some vital stats that allows backroom staff to interrogate player data more than ever before.

It was a last minute decision from FIFA, but in early June 2018 the organization deemed the tech as safe for players to wear during official matches and most wearing it will have been using it throughout training too.

This is a gadget that every kid - and football-mad adult - is always keen to try out, because it can tell you information about how you kick a ball. We even watched Zidane try it.

It’s a Bluetooth sensor suspended in the middle of the regulation-size ball, and it’ll connect to your smartphone to give you information on distance kicked, power behind it and the rotation of the ball too.

This is cool if you just want to use one of the various app modes to test yourself against chums - for instance, finding out who can kick it the furthest.

But if you want to see if you can mimic Ronaldo’s no-spin shot, or bend it into the top corner like Bale, then the ball will let you practice that too, with tips on how to improve.

It’s been around for five years now, which might seem like a bad thing… but actually, this once-expensive device is now rather modestly priced and definitely a decent present for someone (or yourself).

Another sensor for tracking your puffing around the football field, this is by the same Catapult brand that brought you the Playertek system.

However, this one is more expensive and allows you more granular data, with a more accurate sensor on offer and an app that gets digs deeper into your lifestyle than just offering up data.

The app, which is put together in association with performance coaches with experience working with professional Premier League teams, offers more information on things like lifestyle changes, nutrition advice and sleep tips.

This is designed to get your more in tune with what it takes to become an elite football player, and while the app can now be accurate on your sprints and distance covered to the nearest metre (taking in over a thousand data points per second) the data sadly isn’t connected to the insights offered on life improvements.

Still, this is the more advanced system in showing you how you can improve at certain times in the game - combine this with the SmartBall and you’ll know nearly everything about your game.

This is another player tracker, offering the usual smorgasbord of information on what’s happened during the game or training session.

You’ll wear one (or two, if you want more data) calf sleeves with a sensor inside, and this Zepp unit will work out how many kicks and sprints you managed, and the distance you’ve run too.

That’s pretty standard these days for these sensors, but the bigger draw here is the ability to not only rank yourself against other players in the match using the same tech but also see video highlights of yourself too.

This requires someone in the crowd videoing you and tagging the appropriate event, but you’ll be able to see real-time footage of your child doing something magical on the field if you’re not able to be there and learn about what they were actually doing at the time.

We’re fans of the Zepp technology in other areas - notably tennis, where it can really show your range of shots and technique improvement over time - so the brand certainly has the reputation to go with this.

They say that children these days don’t play outside enough, instead preferring to sit inside and play computer games.

Well, Intelligym harnesses that and brings the idea of spatial awareness improvement from gaming onto the football field. The developer, Professor Daniel Gopher, found that a specially-designed game could improve vision and ability on the basketball court, and the technology has been brought into the football space.

Basically, you’re controlling lo-fi dots running around a screen, attempting to pass a ball around and learning about the patterns and moves within a game to improve the chances of hitting the right highlighted section.

If it sounds simplistic, it is - the idea here isn’t to mimic FIFA, but to focus on the core cognitive abilities that top players have to see the movement of a game and find the space - follow the training plan here and it claims you’ll start to see results within 8-10 sessions.

TechRadar’s World Cup of Computers: it's all kicking off

If Pele was a processor... this light-hearted article looks at some of the best computers the world has seen and pits them against each other. Who wins might surprise you.