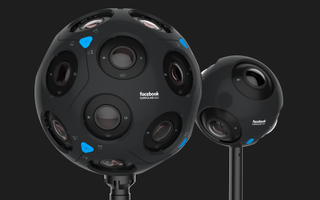 Looking a lot like Nokia’s own OZO 360-degree camera, the two sequels sport 24 and six lenses, respectively, in a spherical orientation. Clearly, this is a marked upgrade upon the previous Facebook Surround 360 camera, which simply had a circular band of cameras.

The idea is more immersion

Each lens on these cameras can shoot within six degrees of freedom, or 6DoF, and each camera is far more portable and durable than the previous model. This means, according to Facebook, that “viewers can move up/down, left/right, and forwards/backwards with pitch, yaw and roll inside the experience to see content from different angles.”

Both cameras are said to capture the full RGB color spectrum and use new depth-estimation algorithms through image oversampling – four times and three times oversampling on the x24 and x6, respectively – to produce better image quality.

These cameras are clearly designed for content creators, but tease a future in which 360-degree video gets even better, with readier access to 3D effects and allowing for viewers to move around within said video – rather than be the focal point of the camera(s).

Designed and prototyped in Facebook’s own Area 404 lab with help from FLIR, a specialized computer imaging company, the social network aims to license out its designs to manufacturing partners to kick start its adoption by content creators.

Better yet, Facebook also revealed that it has boosted the effective resolution of 360-degree video on its platform when streaming to non-VR and VR devices by 51% and 59%, respectively, by using machine learning techniques. These AI techniques predict where viewers will focus on most within a video or be most interested in, devoting the majority of rendered pixels to those areas and at the right times, thus increasing effective resolution.

What this all means for you, in the long run, is 360-degree video somehow cooler than it already is – stay tuned to those News Feeds.