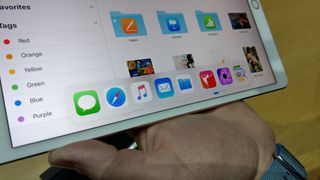 Apple is expected to launch a new iPad Pro 2018 in the coming months, and it’ll take cues from the iPhone X TrueDepth camera, according to fresh, convincing evidence discovered today.

This backs up previous hints in the iOS 12 beta that have indicated the next iPad Pro refresh would add Face ID and maybe even a notch cutout at the top. This is why we think the iPad Pro 2018 will have a bezel-reduced display.

An iPad Pro would the TrueDepth camera also makes sense because iOS 12 brings multi-user support to Face ID. This feature doesn’t make much sense on an iPhone, but an iPad is generally shared between family members.

All of this would mark a major redesign for the iPad, where the home button gets removed and replaced by iPhone X-like gesture navigation. There’s new gesture navigation already baked into the iOS 12 beta for iPad when accessing Control Center.

Bringing Face ID to the iPad isn’t just about security. It’s also about adding Animoji and Memoji to the best tablet often shared between family members. It feels like a natural fit for the iPad and are bound to have a lot of fun with it.

FaceID is already coming to multiple iPhones this fall, according to a financial report from Apple VCSEL supplier, Finisar. So, it’s not much of a stretch for the TrueDepth sensor to be included in the next iPad as well.

If Apple does include these features into the new iPad Pro, it could be a major upgrade over last year’s model. You shouldn’t have to wait much longer to see if any of this is true either – Apple could announce the next lineup of iPads in September alongside the iPhone XI and iPhone 9.