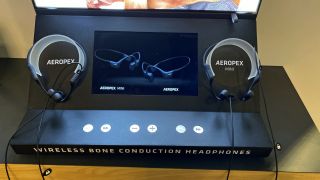 Aftershokz makes some of the best running headphones around, so it certainly caught our eye when we spotted two new models at CES 2020 – one of which fixes a massive bugbear from the recently-launched Aeropex headphones.

The existing Aftershokz Aeropex will be joined by a smaller, Aeropex Mini set of bone-conducting headphones, and these feature a smaller band to allow a more snug fit around the head.

While the original Aeropex are excellent headphones, the band connecting the headphones protrudes rather far behind the head to accommodate a wider range of head sizes. This means it can bounce around somewhat when running, but the new Aeropex Mini features as 9.5mm shorter band for a more snug fit.

Trying them on showed that was exactly the case: while the fit was snug, the headphones still sat perfectly where we wanted them to, and it feels likely that they'll move around less when running.

The same audio technology, which fires sound through the jawbone rather than into the ear canals to allow for safer running (there's nothing like being able to hear when a car's about to hit you, right?) is being used on the new Mini variants, so we expect the same excellent performance when we try these new headphones out.

While those at the Aftershokz stand couldn't confirm when the headphones would be launched precisely or the cost, but it's expected the Aftershokz Aeropex Mini release date will be in the next month or two.

The 'full fat' Aeropex models cost $149 / £149 / AU$249, and we'd expect the price to be the same for the new Mini headphones, based on previous pricing models from Aftershokz.

Google Assistant on the way too

It wasn't just one unannounced product on the show floor at CES, either: Aftershokz is also imbuing its headphones with an extra button to summon Google Assistant.

The new Aeropex Assist headphones are almost identical to the original Aeropex model, so will feature the same bone-conducting pads; the only addition is another button on the right-hand headphone, mirroring a similar one on the left.

This will activate Google Assistant on an Android phone or iPhone through a companion app, allowing you to control your connected smartphone with your voice.

This is an interesting move, as it's a full tie-in with Google (a representative from the search giant even demonstrated the headphones to us) and previous Aftershokz headphones could already activate the voice assistant on a smartphone.

Still, the option will be there if you need it. Again, we don't have a price or release date when these models will be made available, but we've contacted Aftershokz for that information.