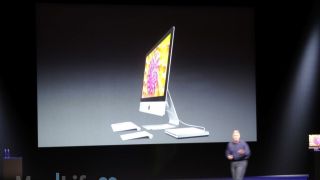 When Apple launched its new iMac desktops last month, the tech world asked in unison: 'How do they make them so thin?' The answer, it appears, is with great difficulty.

A report from Macbidouille (translation) brings word from 'insiders' suggesting that construction difficulties could delay the release of the unique, 5mm-thin, all-in-one desktops until early 2013.

According to the commercial source, it is the 'friction-stir welding' technique, which gives the aesthetically pleasing iMac its seamless edges, that may be causing delays in the manufacturing process.

The insider says that Apple had pencilled in a November 27 launch for the new 21-inch model, but has now been forced to look beyond 2012.

The friction-stir welding technique uses heat and thousands of pounds of pressure in order to fuse two pieces of aluminium together, but this is the first time it has been used in computer manufacturing.

It has previously been used to assemble airplane wings.

Officially, Apple has not adjusted the released schedule. Its online store still lists the 21.5-inch iMac for a November debut, while the 27-inch model is still slated for December.

TechRadar has reached out to Apple for clarification and will update this story if and when a response is forthcoming.