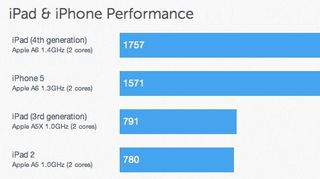 Remember when Hell froze over and Apple moved to Intel chips? It looks like Hell's warming up again: according to Bloomberg, Apple intends to give Intel chips the boot from Macs. That isn't just random speculation, either: we already know that Apple's hiring system-on-a-chip designers, and Bloomberg's sources appear to be credible Apple insiders.

We know that Apple is slowly merging OS X and iOS, and the recent executive reshuffle suggests that's gathering momentum: the iOS and OS X teams have been brought together under Craig Federighi, while Bob Mansfield's technologies division includes "the semiconductor teams, who have ambitious plans for the future."

Apple is famous for its love of simplification, but it currently has two different hardware platforms running two different operating systems. What could be simpler than having one platform, and one OS?

It's an interesting thought, but dumping Intel isn't necessarily the best way to unify the platforms - and not just because the gap between x86 and ARM processors is still huge (although as Jeremy Laird points out, ARM development is happening at dizzying speed). Building an Apple-only processor family would involve massive costs and complexity. Apple wouldn't just have to design processors that were better than Intel ones, but it would also have to get them in the right quantities at the right price. That isn't impossible, of course, but it isn't exactly easy, let alone inevitable.

As things stand today, Apple's processors aren't a good fit for Macs: OS X doesn't run on them, they're 32-bit rather than 64-bit, and for all its joys the A6X in an iPad 4 is hardly a match for the 3.2GHz quad-core Core i5 you can get in an iMac.

Fast-forward a few years, though, and things get more interesting. You might not want an Apple A7 in a MacBook Pro, let alone a Mac Pro, but what about a MacBook Air? Bloomberg reckons that Apple's timescale for the transition is 2017 at the earliest, so that's five years of processor development; that's nearly twice as long as it took Apple to go from the original iPad to the iPad 4.

Apple's processor tech might not be ready for high-end Macs right now, but five years is a long time in this business.