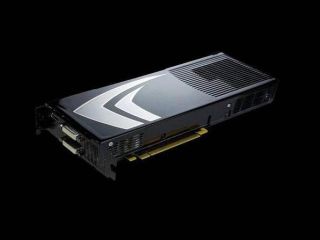 Just over eighteen months ago the much-heralded age of the DirectX10-capable graphics card dawned, as the supreme G80-powered GeForce 8800GTX dropped into the TechRadar office. Six months later came the updated 8800 Ultra, a card that has remained Nvidia's top end offering... until now.

We've had to wait 12 long months for the refresh, during which time we have been treated to a mass of mid-range cards, including the excellent 8800GT - Nvidia's first card with a 65nm core.

Both new cards are powered by the same 65nm G92, a core that is itself now six months old. And it's the first time that Nvidia has released a brand new family of top-end cards based on old architecture. Replacing the 8800GTX and Ultra is a necessity as far as furthering the Nvidia brand is concerned, competition-wise though it's less of an issue. AMD still hasn't managed to create anything to seriously outperform these year-old cards, so is the lack of a new core an acknowledgment that Nvidia only has to turn up at the track to win the race?

The GTX version of the 9800 card is a straight, beefed up version of the G92 with higher clock speeds across the board. While it shares the number of Raster Operators (ROPs) with the 8800GT, it does have the old GTX's complement of shader units at 128, giving it the necessary speed boost.

The GX2 follows the example of the old 7950GX2, strapping two G92-stuffed PCBs together. But this time both PCBs face into the same heatsink and are housed in a vaguely coffin-like surround. The clock speeds are slightly slower than the GTX, but a fair bit of optimising has gone into making this single-card SLI offering an impressive piece of engineering.

The first difference you'll notice when comparing the two new cards with their predecessors is the change in memory capacity. Both the 8800 GTX and Ultra had a 384-bit memory bus with 768MB of GDDR3, while the 9800s make do with the same 256-bit 512MB of memory that resides on the GTS and GT iterations of the G92-based 8800s.

Due to its two cores, the GX2 comes out tops in the memory bandwidth stakes at 128GB/s compared with the Ultra's 103.7GB/s, but the 9800 GTX lags well behind both of the previous cards. What this all means in real terms is that at the higher resolutions, and most especially with full screen anti-aliasing turned on, the new cards take quite a hit at the levels we were hoping these big-panel pixel pushers would excel at.

The differences between the GTX and GX2, and indeed the 8800GT, are slight; the GX2 simply relying on the brute force effect of the single card SLI factor. Where the difference between the two new G92 parts is most obvious though is the number of ROPs. The GTX is still hobbling along with 16, less than both the 8800GTX and Ultra at 24, but due to the doubling up, the 9800 GX2 has 32 ROPs. The difficulty is in knowing how much of a benefit this multi-GPU's extra ROPs gives us as opposed to the single card with 24.

So where do we find ourselves with the two new top-end cards? Well, mostly in the same place we were before to be honest. There's very little difference between this new set and the old, with the 9800 GTX being the biggest disappointment.

It struggles to find any space between itself and the 8800 GTX (which it's supposed to be replacing), and there's also the fact that you can still pick up the older card - with the extra memory, bandwidth and ROPs - for less than £200. In some places you can save yourself around £50 and come out with an equivalent, and in some cases, faster card. The march of progress seems to have stomped right past this iteration of the 9800, and here at TechRadar we might just have to plump for the original DX10 monster.

With regards to the GX2, Nvidia had to go down the multi-GPU route, not just to prove it could produce a functional version like AMD, but also to create a card that it could legitimately call the fastest graphics card around.

Still, the memory constraints hold the GX2 back from being the superlative, stand out, top-end card de jour. On lower-res panels without silicon-melting anti-aliasing, it speeds ahead of the competition. Yet with all the bells and whistles cranked up to a deafening roar it struggles to break-even with the old 8800 Ultra. Again, if you shop around you can pick up an Ultra for around £350, and be fairly sure that your card will have drivers mature enough to cater for whatever you throw down its graphics tubes.

The long and short of it is that if you've got yourself an 8800GTX or Ultra, and felt that twinge of envy at the announcement of this new generation of top-end cards, then you can stop worrying. In fact, you can probably be down-right smug as your slightly geriatric cards are still more than capable of holding their own against these youngbloods. Til the GT200 comes out that is...

The full version of this review will appear in PC Format magazine issue 214 and will go on sale on 4 May.