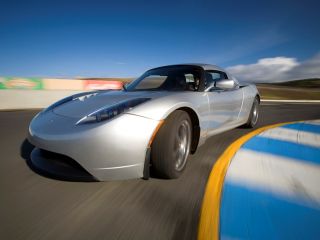 Tesla's electric roadster will soon be available in the UK, but it won't be until 2015 until electric cars goes mainstream

Somewhat surprisingly, there was no specific mention of initiatives that promote the manufacture and use of electric cars and motorbikes.

Chancellor Alistair Darling did make it clear that the government's overall objective is to cut carbon emissions by 34% by 2020.

This according to Calvey Taylor-Haw, Managing Director of Elektromotive, the company which designs and builds charging points for electric cars.

Elektromotive is set to install its 100th parking bay in London shortly, a number set to double by the end of 2009. Outside the UK there are 160 similar bays.

"Our aim is to have Elektrobays on every street and in all car parks around the UK," he told TechRadar.

Faye Sunderland, Editor of the TheGreenCarWebsite.co.uk, also told us: "At the moment there is only one electric car charging point in Manchester, and Boris Johnson predicts it will cost £60m just to have London equipped for electric car use."

Plus, in addition to the growth of the necessary support infrastructure, there is also the issue of the costs of replacement Lithium batteries. Still it is good to see the UK government champion a truly positive eco-friendly technology.

And if you don't fancy waiting around till 2015 and want to improve your carbon footprint right now (and cannot afford a Tesla Roadster!) then you will be more interested to hear that electric bike company A2B electric bikes launches in Europe this month.

A2's electric bikes range from the £1750 'pedal-assist' Hybrid through to the £1950 'power on demand' Metro and are limited to 15.5mph on roads by European and UK legislation.

If that's too slow for you, the Metro has an off-road option which offers speeds of up to 20 mph. Just don't let plod catch you using in on the highway!