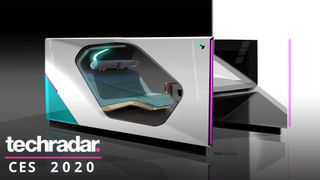 All the big car makers are using CES 2020 to demonstrate their latest self-driving technology, but BMW is going one step further, introducing controls that are activated using nothing but your gaze, as well as plush loungers for you to relax in while the car does the work.

Last year, we got to experience BMW's Natural Interaction – an interface that lets you control features like the car's sunroof and windows with simple hand gestures, and demand information about your surroundings by pointing at locations through the windows. It worked well (though all the pointing felt a little rude).

The company has now taken this idea a step further, eliminating the need to even raise a finger. The new interface uses gaze-tracking to determine where you're looking and provide context for voice instructions.

For example, it can tell whether you're looking at another passenger in the car, a restaurant outside, or part of the car's interior. The aim is to make interacting with the vehicle feel more natural, and like speaking to a person rather than a machine.

Lie back and relax

At CES, BMW demonstrated this new interface in a special concept cabin called BMW i Interaction EASE. This concept only focuses on the car's interior (the exterior is very abstract) and shows just how cushy driving could be once everyone is a passenger.

Each regular seat has been replaced with a ZeroG Lounger, which can be tilted back by up to 60 degrees while still keeping you safe in the event of an accident.

It looks like the stuff of science fiction (or possibly a particularly luxurious dental surgery), but BMW has already fitted three BMW X7 models with the new seats, and the company says they will be ready for production vehicles in a few years.

BMW also brought 20 cars featuring the BMW i3 Urban Suite to Las Vegas for CES to give visitors a taste of luxury. These are regular production BMW i3 cars that have been completely refitted "to recreate the ambience of a boutique hotel".

Everything except the driver's seat and dashboard in each car has been replaced "to create an inviting space with a high feel-good factor in which to spend time – the perfect place for relaxing, enjoying in-car entertainment or focusing on work in a laid-back setting".

These cars aren't actually autonomous (BMW has employed chauffeurs to take them around Vegas) but the effect is pretty much the same. Just don't expect the driver to know what you mean when you start talking to the sunroof.