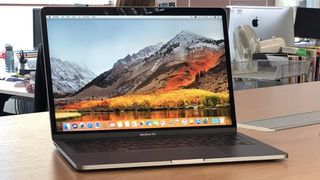 Details on Apple's anticipated 16-inch MacBook Pro are coming hot and heavy, and the latest bit of news suggests that the model could launch as soon as September, DigiTimes reports.

The key detail of this new report is that the 16-inch MacBook Pro presumably will launch alongside Apple's next iPhone, the iPhone 11 (or whatever Apple decides to name it), during a September launch event. That date isn't confirmed yet, though. And, if it does happen in September, the actual retail availability could still be slightly later.

It also wouldn't be surprising for the MacBook Pro to launch at a slightly later date. Apple has had separate events for product lines in the past, even if they were launched close together. Launching the iPhone 11, a popular consumer device, alongside the more niche, professional-oriented MacBook Pro would make less sense than having two separate events with one focused on general consumers and the other focused on prosumers.

Other details and rumors

Also detailed in the reports is that the new model will maintain a similar physical footprint to the current 15-inch MacBook Pro while using a 16-inch LCD display. The resolution may be a somewhat curious 3,072 x 1,920, giving it a 16:10 aspect ratio. This would make it more like the LG gram 17 we saw at CES 2019, and target competition from the likes of the Surface Laptop 2, which has a productivity-focused 3:2 aspect ratio.

It's also suggested that Quanta will be the manufacturer of this new MacBook Pro model.

This is just the latest in a string of details about the MacBook Pro. It's also been reported that the new laptop will ditch the butterfly keyboards that have been plaguing Apple's MacBooks for the last few years. Instead, the new model could have a keyboard using more common scissor switch mechanisms.

One rumor that doesn't seem to be playing out is that of an OLED display. While they can be stunning, as we saw from the Alienware m15, some of the quirks may prevent them from being a perfect option for a machine likely to be used by content creators.