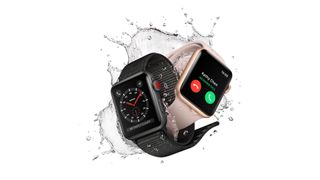 Airtel and Jio have announced partnerships with Apple to bring the Apple Watch Series 3GPS+ Cellular to India. The watch will be available starting 4 May for pre-orders on Jio.com, Reliance Digital stores, Jio stores and the Airtel website. The wearable will officially go on sale starting 11 May across the same platforms.

Though the GPS+ Cellular version isn’t officially on sale yet, it has been listed on the Apple website where you can compare it to the GPS only variant. The GPS model has been in the Indian market since last year with two further variants also available. The sport-band form costs Rs 32,380 and the Nike+ band form is priced at Rs 32,470.

The GPS+ Cellular variant of the Apple Watch Series 3 came into the international market back in September, when it was launched alongside the iPhone 8. It didn’t come to India back then, but it's here now.

What makes the GPS+ Cellular different from the GPS (only) Apple Watch Series 3 is that it supports a built-in embedded SIM (eSIM) which enables network connectivity.

The user may want to purchase the Apple Watch but may not necessarily want to buy the iPhone. But, Apple doesn’t have a provision for that, yet. In order to use the Apple Watch Series 3, the user must already own an iPhone 6 or a later model with the minimum requirement of iOS 11.

This is because the eSIM in the Apple Watch allows the user to retain the same cellular number as the one on their iPhone.

Jio customers will be entitled to priority first-day home delivery. The package will include both the Apple Watch and relevant Jio service. Jio has no plans of passing additional charges for using the wearable. Users can continue with the same prepaid or postpaid plan that they already have. Both devices will simultaneously work off the same tariff.

On the other hand, Airtel users will have to specifically subscribe to one of the Infinity tariff plans in order to have the same cellular number on the iPhone as well as the Apple Watch Series 3 GPS+ Cellular.

The new Apple Watch Series 3 will be going up against the Huawei Watch 2, one of the other popular options among smart 4G-enabled wearables available in India. The Huawei Watch is feature rich and has an on-board storage of 4GB, but the Apple Watch Series 3 with network connectivity offers a whopping 16GB instead. Even the non-cellular version offers 8GB, which is double of what Huawei has in the market.