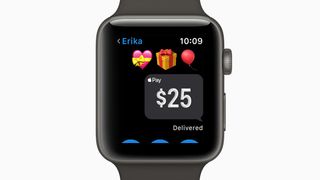 Originally a questionable device, the Apple Watch continues to come into its own thanks to a steady rollout of appealing features for watchOS. The latest of these is Apple Pay Cash, which now lets Apple Watch users in the US send money to any other iOS users directly through the smartwatch's interface.

The only real requirement is that both sender and receiver have iPhones running iOS 11.2 and that you have a debit or credit card linked to your Apple Pay account.

The actual act of sending cash is quite simple. Just open the Messages app as though you were about to send a text message to a friend, and you'll find a new option for sending money via Apple Pay Cash at the bottom of a conversation. Follow the prompts, decide on a number, and off it goes. (Sending money through Facebook Messenger works much the same way.)

The money gets sent in the form of funds on a digital Apple Pay Cash card, which can then be used to purchase items through Apple Pay or sent directly through a bank account. You can also use the service through Siri, although we'd exercise caution given Siri's tendency to mix up "fifteen" and "fifty."

Apple Pay Cash only came to iPhones last weekend, so the release of iOS 11.2 represents a remarkably swift turnaround for Apple Watch support.

The feature is currently only available in the US, although that will likely change in the coming months. Apple Pay proper was originally limited to the US as well, but began spreading to other countries several months after release.

This is but another step in the ongoing improvement of the Apple Watch, which received a big boost this year with the Apple Watch 3 when Apple finally eliminated the need to have a paired iPhone nearby by offering onboard LTE connectivity.

Previously, in watchOS 4.1, Apple introduced the ability to stream Apple Music and listen to music from your iCloud library  on your Apple Watch solely by being connected to a Wi-Fi or cellular connection.

To download watchOS 4.1, simply place your Apple Watch on the charger with at least a 50% charge, ensure it's connected to a Wi-Fi connection,and start the update through Watch > General > Software Update.