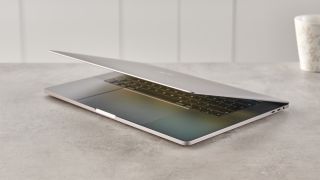 Apple’s rumored incoming MacBook Pro 16-inch could be out next month, at least according to the latest bit of speculation on the machine.

This comes from analyst firm TrendForce, which made the observation in a report about the laptop market, and the outlook for the third quarter therein.

As spotted by Mac Rumors, TrendForce observed that along with strong demand for Chromebooks as the Back to School season rolls around, “we see new products hitting shelves, such as Apple’s 16-inch MacBook”.

If the new MacBook is indeed real and being prepared for a Q3 launch (an on-shelf launch, not a paper one), that means it will be on sale in September (the final month of that quarter).

We’ve heard other recent buzz about Apple’s purported laptop, including comments from Jeff Lin at analyst firm IHS Markit, who reckons that the MacBook Pro 16-inch will be revealed and go into production in September – pointing to a possible launch following shortly thereafter.

And DigiTimes also recently chipped in predicting a September launch, potentially with the on-sale date being slightly later. Another source, Taiwan’s United Daily News (UDN), has previously indicated that the MacBook Pro 16-inch will land in October.

It’s clear enough, then, that there is certainly a growing weight of speculation suggesting Apple is looking at pushing out this new machine perhaps as soon as September or October. And all this churning from the rumor mill is unlikely to be without cause…

Interestingly, Jeff Lin also contends that the launch of this 16-inch model will mean that Apple kills off the current 15.4-inch version of the MacBook Pro, effectively replacing it with the new product.

Rumor has it that while the MacBook Pro 16-inch will have a bigger screen, it will have much slimmer bezels, enabling Apple to keep the chassis the same size as the current MacBook Pro 15-inch.

Further predictions for the alleged new MacBook Pro include that it will keep the same Intel Coffee Lake-H Refresh CPUs as used in the current MacBook Pro 15-inch, and that it will run with an LCD screen featuring a resolution of 3,072 x 1,920 pixels (and won’t adopt OLED tech as a previous rumor indicated).

The keyboard will also ditch the controversial Butterfly switch, according to another report, in favor of a scissor switch mechanism in an effort to boost reliability.

Again, all of this is speculation, including the existence of a MacBook Pro 16-inch, but we should find out soon enough whether this chatter is on the money.