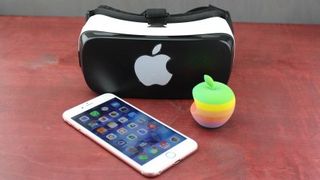 Apple is developing a wireless headset that can be used for both virtual reality (VR) and augmented reality (AR), according to a new report.

Impressively, the VR/AR standalone headset will feature displays with resolutions of 8K (7680 x 4320) per eye, according a person familiar with Apple's plans who divulged the details to CNET.

For comparison, the HTC Vive Pro, the latest high-end VR headset on the market, has a resolution of 2880 x 1600.

Unlike the HTC Vive and Oculus Rift, Apple's rumored headset wouldn't be tethered to a PC. What's more, it also wouldn't need a smartphone to run, like Google Daydream View and Samsung Gear VR.

Instead, it would be connected wirelessly to a box housing a powerful Apple-made processor, reports CNET. Apple has been rumored to be developing its own processors for Mac computers with the aim of discarding Intel chips by 2020, so the headset-powering processor could be part of this initiative.

Apple is reportedly targeting a 2020 launch for the headset. It could cancel the headset plans at any time, of course.

After all of Apple's time and energy spent promoting AR, it's interesting to see that the company is (reportedly) combining the technology that overlays digital renders onto the real world (AR) with VR, which takes users into a wholly virtual world.

CEO Tim Cook has long touted AR's advantages over VR, including saying that AR enhances someone's experience while keeping them present in what's going on around them.

Just a few months ago, Cook said during an earnings call with investors that he sees, "AR as being profound."

"AR has the ability to amplify human performance instead of isolating humans," he said on the same call. "So I am a huge, huge believer in AR. We put a lot of energy on AR. We're moving very fast."

And then there's ARKit, the platform Apple launched with iOS 11 that lets developers create AR apps for the iPhone and iPad.

But despite it's heavy focus thus far on AR, it seems Apple is keen to give users a choice in what they experience; either AR for an enhanced experience that keeps them present in the real world, or VR for those times users want to be transported somewhere else entirely.