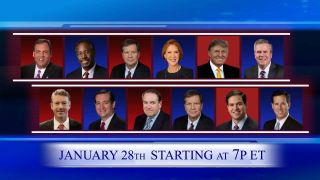 Update: Tonight's Fox News Presidential Debate live stream is underway! You can watch it online with the following instructions.

Noticeably absent from the tonight's debate live stream will be Donald Trump. If you watch online, you won't see him, and he blames it on his feud debate moderator Megyn Kelly. There's a podium waiting in the wings in case Trump changes his mind at the last second, according to Fox News Channel.

While the debate itself will be held at the Iowa, you don't have to make an insanely long commute to watch it in person. In fact, Fox News will stream it online for free, no subscription needed via its website.

How to watch the Fox News Presidential debate live stream

So, now that you know all the players and the restrictions to get in, only one question remains: how exactly do you tune in?

Well, thankfully, the answer here is a simple one. All you need to do is head over to Fox News' website where a live stream will be available, for free, without a subscription.

The debate, by all accounts, should be a big one, as it's one of the last times the candidates will take the stage before the Iowa caucuses, which represent the formal start to the Republican presidential nominations.

To stream the debate on all desktop devices head over to FOXNews.com and you should see a link to the debate once it begins.

Of course, if you're looking for a more traditional way to watch the candidates dodge questions, you can tune into the Fox News TV channel and Fox New radio, as well as the Fox News Mobile and Fox News Go apps if you've got your mobile device around.

Fox News will also partner up with YouTube and Google this time around to offer real-time insights into the questions asked by the moderators via Google Trends, as well as additional questions from pre-chosen YouTube personalities.

OK, but how is this debate going to be different?

It will have Rand Paul, at least. Last time Paul's campaign did not garner enough of popularity to make it into the primetime debate, leading the Kentucky Senator to completely forgo the entire event.

Unfortunately, while Trump has new scores to settle with Ted Cruz and Fox News anchor Megyn Kelly, we won't get to see that political drama play out.

The other big recent development was former Vice Presidential candidate Sarah Palin endorsing Donald Trump, much to the chagrin of his opposition, while radio host Glenn Beck gave his nod to Ted Cruz.

But, admittedly, it won't be long until the political wagons circle again on February 6 when ABC will have its shot at hosting the Republican presidential contenders.

The next Democratic Presidential debate takes place at the University of Wisconsin-Milwaukee on Thursday, Feb. 11, and will be hosted by PBS.

Continue on to the next page to read what happened at the last FBN Republican debate.