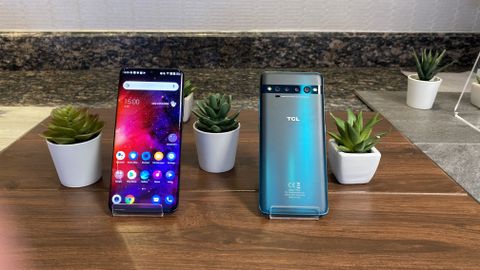 A smart device from TCL, a brand that's looking to make waves with its low-cost offerings - for under $500 this feels like a phone that achieves just that.

You might not be familiar with TCL as a brand, but you soon will be if it keeps making phones like the TCL 10 Pro, launched at CES 2020.

It's got a strong AMOLED screen, a (likely, as the spec list is unconfirmed before launch) decent-quality Snapdragon 675 processor, and a splendid price of under $500 (around £379, AU$720).

With that price point, the key specs don't hugely matter since the price is so low compared to the much higher-end OLED phones in the Samsung Galaxy S10 and iPhone 11 Pro - but it does also pack a four-camera array on the rear that includes a 64MP snapper and a super-macro lens.

The design of the phone is what impresses the most - the rear, with a matte finish in silver and green color choices, is what we enjoy first. It feels great in the hand and the sensors being flush to the body impress, with the stripe offering some stylish  flair.

Here's something else you'll like - there's a headphone jack on this phone! We use exclamation marks on purpose as there's still such an appetite for this kind of thing on a smartphone, and while it is on the top of the phone and thus less convenient, it's nice to see.

The left-hand side of the phone features a smart button that can be reconfigured in a number of ways with a single, double or long press - it's essentially a Google Assistant key by design with more features you can set yourself.

There's only a single speaker at the bottom of the phone, with a USB-C connection, and the sound that pours out is a little on the tinny side - but again, we can see these compromises would come up based on the lower cost.

We tried the camera, but it was clear that this was really early software and thus not a fair preview to talk about the results. That said, we did like the auto-blur that came when getting in close to objects, and the overall quality seemed fine.

There's going to be a 64MP main snapper, with various other sensors ranging from 2MP-24MP (for things like depth perception and close up shots, presumably) but we'll need to test this more at MWC 2020 when that rolls around next month.

For under $500, the TCL 10 Pro's high-quality AMOLED screen stands out instantly - the benefit of the brand being vertically integrated in terms of the component production.

The overally quality of this phone is clear when you pick it up, and while nothing about the spec list truly inspires, much like the early OnePlus phones of years ago, the low price combined with the early performance is something we're pretty impressed by.

This is a flash hands-on review to give you the chance to see what the TCL 10 Pro is all about as soon as possible. Stay tuned as we'll be expanding and upgrading this hands on review very shortly with more info.